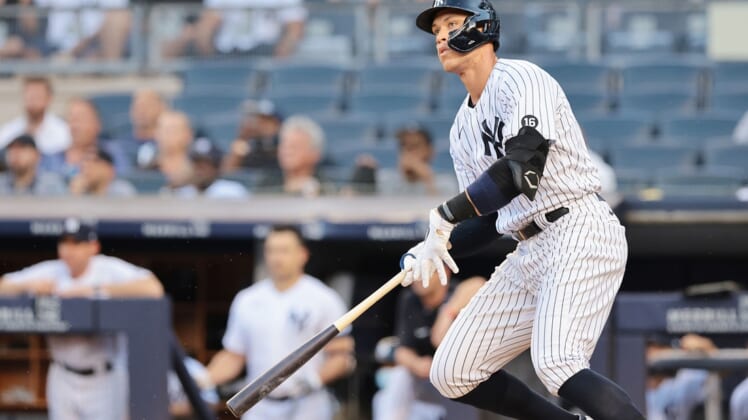 In his 10th career at-bat in New York, Ohtani made his first hit in the Bronx an impressive one. He sent a full-count curveball off New York right-hander Michael King (0-4) 416 feet into the right-center field bleachers for a 1-0 lead.

It was Ohtani’s 26th homer, giving the two-way star a share of the major league lead with Toronto Blue Jays’ slugger Vladimir Guerrero Jr. It also was his 11th homer this month, two shy of matching the team record for June held by Tim Salmon (1996) and Albert Pujols (2015).

Ohtani heard some cheers from the crowd as he rounded the bases after hitting his latest homer. He went 1-for-5 in his fourth appearance against the Yankees in New York.

Jared Walsh added an RBI double in the first and Juan Lagares homered in the sixth for the Angels, who won their second straight following a five-game skid. Jose Iglesias added insurance with a double in the eighth.

The Angels took the lead for good in the fifth thanks to shoddy Yankee defense. After Anthony Rendon’s double chased King, Walsh reached when his ball deflected off DJ LeMahieu’s glove for an error as the second baseman was shifted into right field.

Rendon then scored when the Yankees could not turn a double play because Max Stassi’s hard grounder hit LeMahieu in the chest.

Gary Sanchez hit an RBI groundout and Gio Urshela homered for the Yankees, who dropped their fourth straight and fell to 12-19 since getting nine games over .500 on May 23. Stanton homered in the sixth but mustered one baserunner the rest of the way.

Los Angeles right-hander Dylan Bundy allowed two runs on four hits in 1 2/3 innings before leaving the game due to heat exhaustion from pitching in 91-degree heat.

Before throwing a pitch to LeMahieu, Bundy bent over and began violently throwing up on the back of the mound while holding both hands on his knees. After getting checked out by a trainer and manager Joe Maddon, Bundy was replaced by Jose Suarez.

Suarez (3-1) allowed one run on two hits in 5 1/3 innings. Steve Cishek worked a scoreless eighth and Raisel Iglesias whiffed the side in the ninth for his 14th save.