Ohtani, who announced on Friday he would participate in the Home Run Derby during the All-Star festivities next month, has hit five home runs in his past five games, increasing his season total to 22, one behind Toronto’s Vladimir Guerrero Jr. for the major league lead.

Jared Walsh also homered for Los Angeles, his 17th of the season. Walsh also had one of the Angels’ six doubles in the game. David Fletcher had a double among his three hits, while also successfully executing a safety squeeze.

The Angels took a 1-0 lead in the second inning against Tigers starter Wily Peralta (0-1) after Walsh doubled with one out, went to third on an infield single by Jose Iglesias and scored on Luis Rengifo’s groundout.

The Angels increased their lead in the third on a pair of two-run homers. Fletcher led off the inning with a single and scored one out later on Ohtani’s home run. Taylor Ward followed with a double and scored on Walsh’s home run for a 5-0 lead. 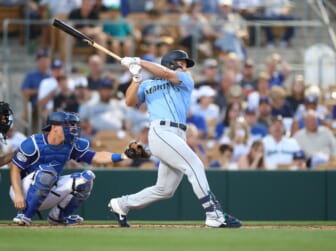 Also Read:
5 top MLB prospects who could debut in the second half

Angels starter Patrick Sandoval (2-2) kept the Tigers off the scoreboard until the fifth when Daz Cameron led off the inning with a home run. Jonathan Schoop’s solo homer in the sixth, his 13th of the season, cut Detroit’s deficit to 5-2.

And when Sandoval walked Miguel Cabrera with two out in the sixth, he was replaced by Steve Cishek, who later in the inning gave up an RBI single to Cameron to make it 5-3. The run was charged to Sandoval, who allowed three runs on four hits and two walks in 5 2/3 innings. He struck out nine, one short of his season-best.

The Angels got a run back in the bottom of the inning when Fletcher’s safety squeeze scored Rengifo from third to put the Angels up 6-3. The Angels added a couple insurance runs in the eighth.