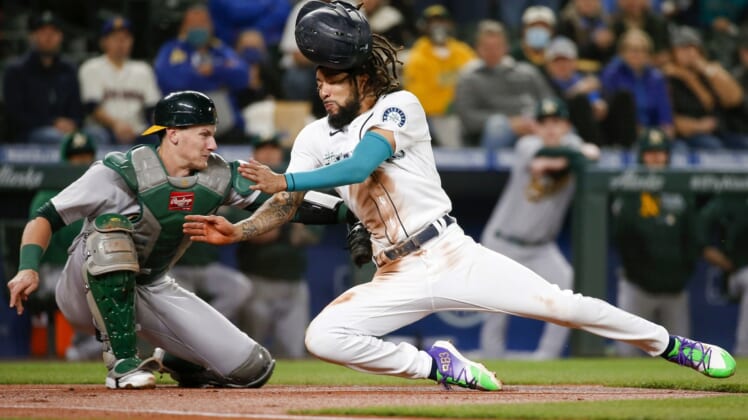 Mitch Haniger hit his 100th career homer as the Seattle Mariners gained ground in the American League’s postseason chase with a 4-2 victory against the visiting Oakland Athletics on Tuesday night.

Jake Fraley added a two-run double as the Mariners (88-70) pulled within a half-game of Boston for the league’s second and final wild card berth. They defeated the A’s for the 11th consecutive time, a franchise record.

Left-hander Anthony Misiewicz (5-5) earned the victory and right-hander Drew Steckenrider pitched the ninth for his 12th save.

After Pinder gave Oakland a 1-0 lead with a solo shot to center leading off the fourth, the Mariners responded in the bottom of the inning.

With one out, Jarred Kelenic walked, bringing an end to the night for A’s starter Chris Bassitt. Luis Torrens greeted right-hander Yusmeiro Petit (8-3) with a single to center and Fraley followed with a double into the right field corner, giving Seattle a 2-1 lead.

The Mariners tacked on a run in the sixth after singles by Abraham Toro and Torrens. With two outs, Tom Murphy reached on an infield single to make it 3-1.

The A’s got a run back in the seventh. Leadoff hitter Mark Canha reached on a fielding error by reliever Diego Castillo. With two outs, Sean Murphy was hit by a pitch and Tony Kemp lined a run-scoring single to right.

Haniger restored the two-run lead with two outs in the bottom of the inning with a solo shot to left off lefty Jake Diekman. It was Haniger’s 38th homer of the season.

Bassitt, making his second start since taking a line drive to the face Aug. 17 in Chicago, gave up one run on three hits in 3 1/ 3 innings, with three walks and one strikeout.