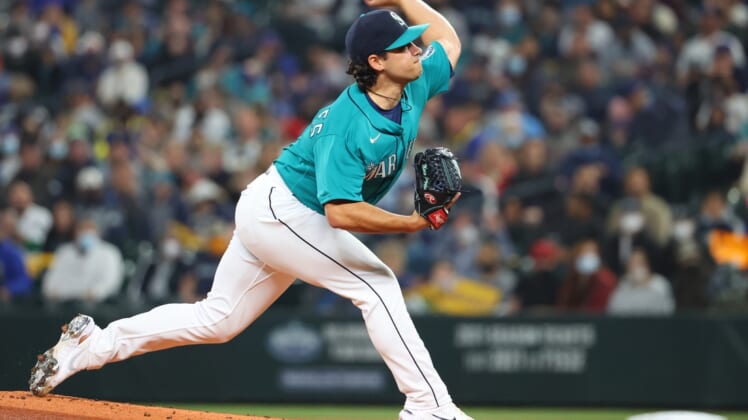 Luis Quijada came on in relief with runners at the corners and no outs in the seventh inning and struck out the next three hitters as the visiting Los Angeles Angels damaged the Seattle Mariners’ playoff hopes with a 2-1 victory Friday.

Brandon Marsh hit a two-run double as the Angels (76-84) won for just the fourth time in their past 14 games.

Seattle is now tied with Toronto (89-71) after the Blue Jays beat the visiting Baltimore Orioles 6-4.

All of the teams have two games left in the regular season.

Closer Raisel Iglesias allowed a leadoff double to Kyle Seager in the ninth but got a tapper back to the mound, an infield fly and a flyout to right to get out of the inning to earn his 34th save.

With the Mariners trailing 2-1, Luis Torrens led off the Seattle half of the seventh against Mike Mayers with a triple into the right field corner that popped out of the glove of Juan Lagares as he leaped against the wall.

After a walk to Abraham Toro, Quijada, a left-hander, came in to face the left-handed-hitting Jarred Kelenic. Quijada fanned Kelenic on a 95 mph fastball at the top of the zone on a 3-2 pitch. He then struck out Tom Murphy swinging and caught Dylan Moore looking at a called third strike on another 3-2 pitch.

The Mariners opened the scoring in the second inning. With two outs, Toro slapped a single to center and Kelenic followed with a double to right, bringing home Toro from first.

The Angels struck back with two runs in the third. Luis Rengifo led off with a line-drive single to left and David Fletcher drew a walk. Marsh then doubled to left-center, just out of the reach of left fielder Moore, to bring home both runners.