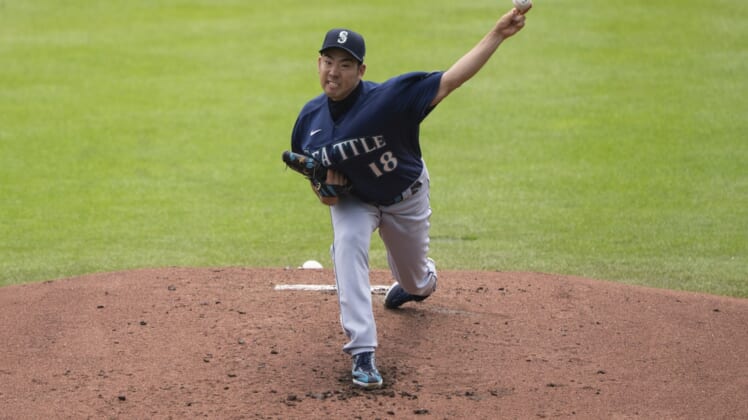 The Mariners took the three-game series 2-1 and finished their road trip at 4-2.

Marcus Semien had three hits — including a solo homer and a double — for the Blue Jays, who fell to 4-3 after seven games of a 10-game homestand.

Seattle left-hander Yusei Kikuchi (6-3) allowed one run and five hits while striking out six in seven innings. Paul Sewald allowed an infield hit and a walk while striking out four in 1 1/3 innings to earn his first save of the season.

Toronto left-hander Hyun Jin Ryu (7-5) allowed five runs (four earned), seven hits and two walks while striking out two in four innings. The two home runs he allowed were the first against him by left-handed hitters this season.

The Mariners scored twice in the first. J.P. Crawford led off with a double and took third on Mitch Haniger’s single. Crawford scored and Haniger went to third on Kyle Seager’s infield single to third and first baseman Vladimir Guerrero Jr.’s missed catch on the throw. Ty France added a sacrifice fly.

Semien led off the bottom of the first with his 20th home run of the season for Toronto.

Fraley hit his sixth homer of the season — all on the road — with two out in the second.

Long hit his third homer this season with two out in the third after Jake Bauers had walked with one out.

Toronto’s Tyler Chatwood allowed two walks and RBI singles by Seager and Bauers in the ninth.