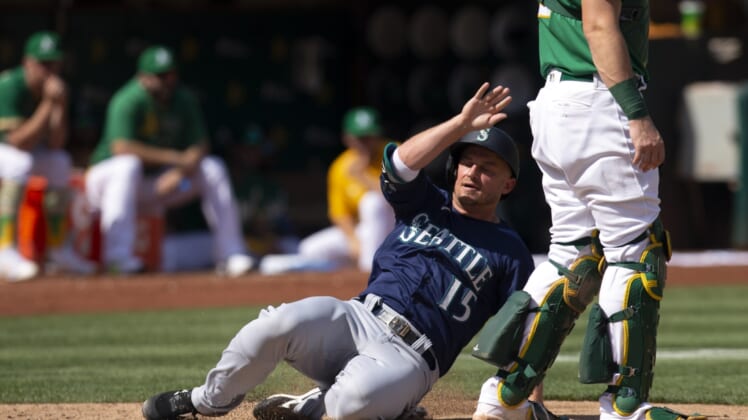 Pinch-hitter Luis Torrens hit a two-run home run to break a tie in the sixth inning and the Seattle Mariners completed the franchise’s first-ever four-game road sweep of the Oakland Athletics with a 6-5 victory Thursday afternoon.

Sean Murphy and Matt Olson homered for the A’s (82-71), who have lost nine straight in the season series. Olson’s solo shot came with two outs in the ninth off right-hander Paul Sewald, who earned his 10th save.

Sparked by the return of Chris Bassitt, Oakland took a 3-0 lead through three innings.

The right-hander was making his first appearance since getting hit in the face with a 100-mph line drive off the bat of the Chicago White Sox’s Brian Goodwin on Aug. 17.

In three innings, Bassitt allowed one hit, a leadoff single in the first to J.P. Crawford. Bassitt walked one and struck out four.

The A’s took a 1-0 lead in the second as Matt Chapman drew a leadoff walk, advanced to third on Murphy’s one-out single and scored on Elvis Andrus’ sacrifice fly.

Oakland tacked on two more runs in the third, as Matt Olson walked with one out and scored on Yan Gomes’ double. Mark Canha lined a single to bring home Gomes and make it 3-0.

Right-hander James Kaprielian took over for Bassitt in the fourth. He hit Kyle Seager with a pitch to lead off the inning and, with two outs, allowed a run-scoring double by Abraham Toro.

Murphy’s solo shot leading off the bottom of the inning made it 4-1.

The Mariners pulled within 4-3 in the fifth as Dylan Moore led off with a single and Raleigh followed with a two-run shot to right.

Seattle took the lead with a three-run sixth against Diekman. Haniger led off with a homer to right to tie the score at 4-4. Jarred Kelenic drew a walk and after Toro struck out, pinch-hitter Torrens hit a two-run shot to left to make it 6-4.