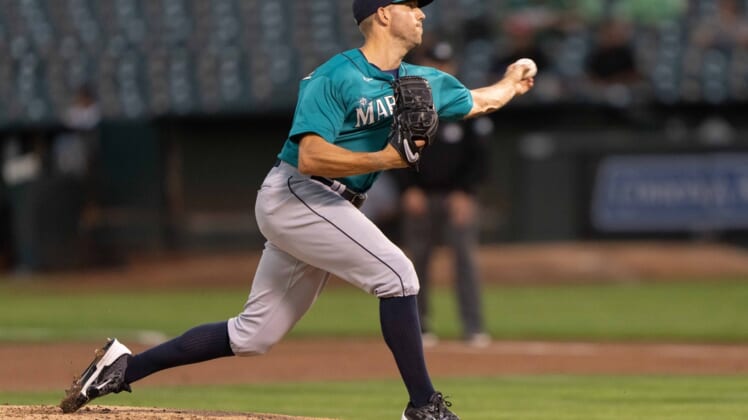 The Seattle Mariners dealt the host Oakland Athletics a damaging loss Monday night, riding the baffling soft-tossing of left-hander Tyler Anderson to a 4-2 victory in the opener of a four-game series between American League playoff hopefuls.

Kyle Seager stroked three hits, including a two-run double that capped a three-run third, as the Mariners (81-69) moved within one game of the A’s (82-68) as both teams are chasing AL wild-card spots.

The loss dropped Oakland two games out of the second wild-card position in the AL, with the Mariners three back.

After Mitch Haniger drew a walk to load the bases, Seager bombed a double to center field, scoring two more and making it a 3-0 game.

Oakland got one back in the bottom of the inning on back-to-back doubles by Chad Pinder and Khris Davis, but Seattle regained its three-run cushion in the fifth when Seager singled home Haniger, who had doubled.

The A’s had just two other hits off Anderson (7-9) in his seven innings. He walked one and struck out seven.

Manaea was pulled after five innings, charged with four runs on eight hits. He walked one and struck out three.

Oakland made things interesting against the Seattle bullpen in the eighth when Elvis Andrus, Josh Harrison and Starling Marte singled consecutively, closing the gap to 4-2 and putting the potential tying runs on the bases with just one out.

But Paul Sewald replaced Diego Castillo on the mound and struck out both Matt Olson and Matt Chapman to retain the lead.

Sewald stayed on to pitch a 1-2-3 ninth to secure his ninth save.

Seager finished with three RBIs, while Crawford and Haniger collected two hits apiece for the Mariners, who improved to 9-4 against the A’s this season.

The doubles by Pinder and Davis were the only extra-base hits for the A’s, who were out-hit 10-7.