Basketball Hall of Famer Scottie Pippen on Monday accused his former coach Phil Jackson of being a racist.

While appearing on the “Dan Patrick Show,” the Chicago Bulls great followed up previous comments he made about Jackson during a recent GQ interview.

Pippen, 55, referenced a play in the latter stages of Game 3 of the 1994 Eastern Conference semifinals when the Bulls opposed the New York Knicks. Jackson drew up the final shot for then-rookie forward Toni Kukoc, who is white, as opposed to Pippen, who infamously refused to re-enter the game.

“By saying a racial move, then you’re calling Phil a racist,” Patrick said to Pippen.

“I don’t got a problem with that,” Pippen said.

Patrick responded, “Do you think Phil was or is (a racist)?”

Pippen didn’t let it end there.

“Why would Toni, who was a rookie, get the last-second shot and you put me out of bounds? That’s what I mean racial,” Pippen said.

When Patrick suggested that a design for a last shot may not define Jackson as a racist, Pippen responded: “Well, that’s your way of putting it out, and I have my way. I was in the locker room with him. I was in practices with him. You’re looking from afar.”

Kukoc hit the shot that won the game for Chicago. 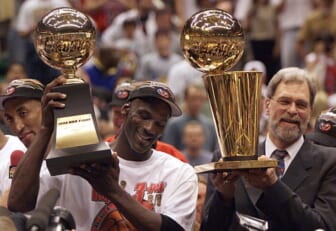 Also Read:
Scottie Pippen ‘beyond livid’ about how Michael Jordan portrayed him in doc

Pippen was a seven-time All-Star who won six NBA championships alongside Jordan in Chicago. Jackson was in charge of the Bulls for the entire run.