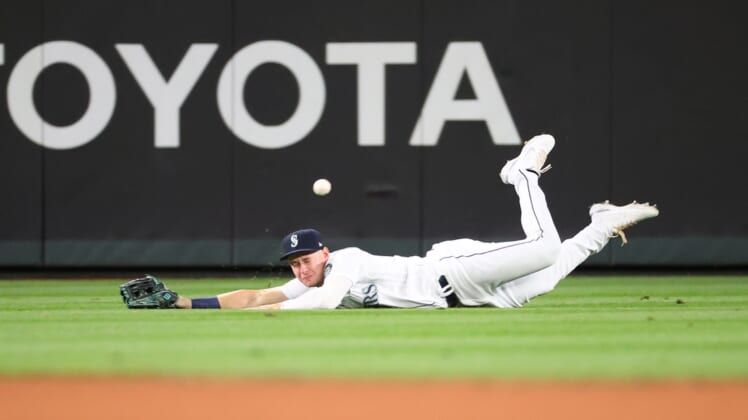 J.D. Martinez, Bobby Dalbec and Alex Verdugo homered for the Red Sox (82-65), who are tied the Toronto Blue Jays (81-64) and the New York Yankees (81-64) for the American League’s two wild-card playoff berths.

The Mariners (78-67) dropped three games back in their bid for their first postseason berth since 2001.

With the score 2-2, Boston’s Xander Bogaerts led off the eighth inning with a triple to right-center field off Joe Smith (2-4). Drew Steckenrider replaced Smith and walked Rafael Devers before Martinez grounded out to third.

A walk to pinch hitter Travis Shaw loaded the bases, and Schwarber lined a double into the gap in right-center to give Boston a 5-2 lead. Verdugo followed with a two-run shot off Yohan Ramirez to cap the five-run outburst.

Martinez’s sacrifice fly made it 8-2 in the ninth before the Mariners scored twice in the bottom of the inning, on a sacrifice fly by J.P Crawford and a run-scoring single by Mitch Haniger.

Red Sox right-hander Adam Ottavino (6-3) got the victory after retiring the only batter he faced.

Martinez broke a scoreless tie with a solo shot to center field off Seattle starter Tyler Anderson with one out in the fourth.

The Mariners responded with two runs in the bottom of the inning off Boston starter Nathan Eovaldi.

Haniger led off by grounding a single into left field, and Kyle Seager hit a dribbler down the third base line off the end of the bat for a single against a defensive shift. Ty France then blooped a low, outside pitch into shallow right-center, scoring Haniger from second.

Abraham Toro hit a fly ball to the warning track that right fielder Hunter Renfroe dropped, loading the bases with no outs. After Eovaldi struck out Jarred Kelenic, Jake Fraley hit a sacrifice fly to deep center to make it 2-1.

Dalbec tied it with an opposite-field, solo shot to right with two outs in the sixth on a 3-2 pitch from Anthony Misiewicz.

Eovaldi went five innings and allowed two runs, one earned, on five hits and one walk with nine strikeouts.

Anderson gave up one run on four hits in 4 1/3 innings, with two walks and five strikeouts.