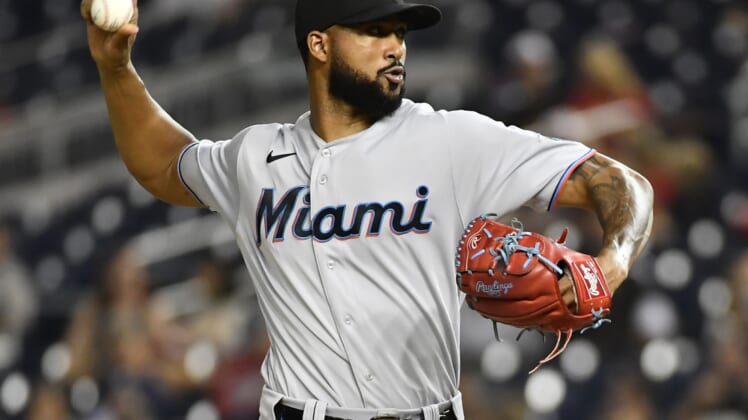 Sandy Alcantara took a no-hitter into the seventh inning as the visiting Miami Marlins defeated the Washington Nationals 3-0 on Monday night.

Josh Bell ended Alcantara’s no-hit bid when he lined a single off the base of the right field wall with two outs in the seventh.

Alcantara (9-13) pitched eight innings, giving up just the one hit and striking out seven without a walk. He threw 96 pitches.

Dylan Floro tossed a one-hit ninth for his 11th save.

Alcantara was bidding for the seventh no-hitter in Marlins team history and the first since Edinson Volquez turned the trick in a 3-0 win over the Arizona Diamondbacks on June 3, 2017.

The right-hander was nearly done after four innings. With two outs in the fourth, Juan Soto smashed a ground ball that caromed off Alcantara’s lower left leg and over to first baseman Lewin Diaz, who stepped on the bag.

Alcantara slowly walked off and was seen talking to manager Don Mattingly in the dugout. Mattingly and the team trainer came out to watch Alcantara warm up before the fifth and decided he was good to go.

The Nationals got their first baserunner leading off the sixth when second baseman Jazz Chisholm Jr. bobbled Keibert Ruiz’s hard grounder for an error.

Nationals start Paolo Espino (4-5) allowed one run on six hits and three walks in six innings. He struck out six.

The Marlins jumped out to a 1-0 lead in the first. Chisholm singled with one out, stole second and scored ahead of Soto’s throw on a line-drive single to right by Jesus Sanchez. Espino induced a double-play grounder from Lewis Brinson to strand Bryan De La Cruz on third.

Miami had runners on first and second with two outs in the fourth, but No. 8 hitter Isan Diaz was intentionally walked before Alcantara struck out.

Alex Jackson provided some insurance with a two-run double in the ninth.

Ruiz was back in the Washington lineup after being hit in the head by a pitch Saturday against the Pittsburgh Pirates.

The Nationals (59-85) lost for the fourth time in five games. The Marlins (61-83) have alternated wins and losses over their past five contests.