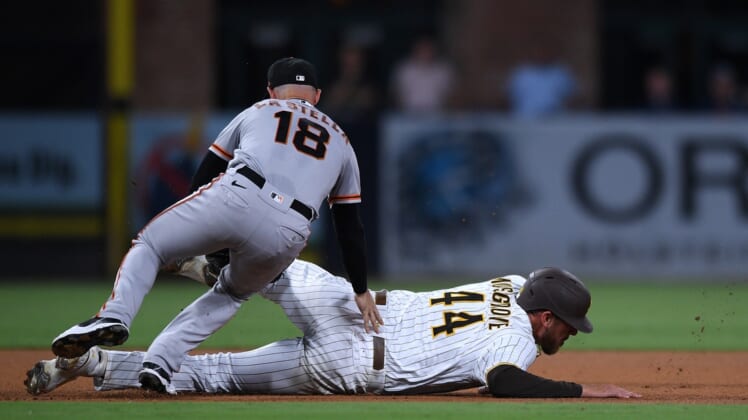 LaMonte Wade Jr. dumped a tiebreaking single into left-center field with one out in the ninth inning Tuesday night, delivering the visiting San Francisco Giants a 6-5 victory over the San Diego Padres.

Knowing that a loss would have meant falling into a first-place tie atop the National League West with the Los Angeles Dodgers (97-54), who won earlier in the evening at Colorado, the Giants (98-53) got consecutive one-out singles from Brandon Belt, Buster Posey and Wade off Mark Melancon (4-3) to produce the difference-making run.

Tyler Rogers protected the slim advantage in the last of the ninth, getting Manny Machado, who homered twice previously, to ground into a game-ending double play with two aboard for his 13th save.

A fourth straight loss dropped the Padres (76-74) five games out of the final NL wild-card spot with just 12 games remaining.

Both teams rallied from deficits to create the 5-5 tie heading into the ninth.

The Giants’ Tommy La Stella led off the game with a home run, his sixth long ball of the season, off Padres starter Joe Musgrove.

San Diego rode Machado’s two homers, both solo shots, and another from Tommy Pham to go up 4-1 in the third.

The homers were Nos. 25 and 26 for Machado, No. 15 for Pham. San Diego’s Fernando Tatis Jr. also drove in a run with a second-inning single.

San Francisco pinch hitter Wilmer Flores delivered an RBI single and Posey hit a sacrifice fly in a two-run fifth. In the sixth, Brandon Crawford doubled home a run and another scored on a Mike Yastrzemski sacrifice fly to give the Giants a 5-4 lead.

The Padres went back to the long ball to get even when Austin Nola homered, his second, to lead off the bottom of the sixth.

Wade, Belt, Posey and Evan Longoria had two hits apiece for the Giants, who were opening a six-game road trip, their final trek of the season.

Machado added a single to his homers while Nola, Musgrove and Tatis collected two hits apiece for the Padres, who lost despite out-homering the Giants 4-1.