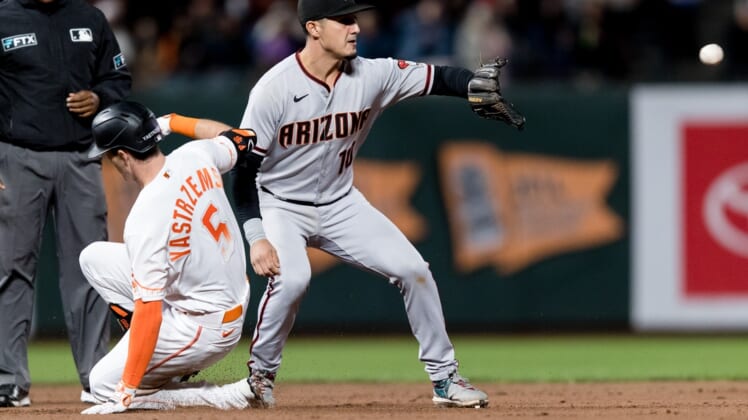 The San Francisco Giants took a step closer to a National League West title Tuesday night, using a four-run sixth inning to leave the visiting Arizona Diamondbacks behind for good in a 6-4 victory.

With the second-place Los Angeles Dodgers (101-56) also winning, the Giants (103-54) retained a two-game lead atop the West while lowering their magic number for winning the division to four.

Both starting pitchers were gone and the game was tied 1-1 entering the last of the sixth before the Giants took command.

An error, a hit batsman and a Tommy La Stella single set the stage for the big inning, which featured RBI singles by Wilmer Flores and Brandon Crawford, a bases-loaded walk drawn by Posey and a Joe Mantiply wild pitch with the bases loaded that made it 5-1.

Jake McCarthy countered with a solo shot, his second home run of the season, in the top of the seventh, but the Giants re-established a four-run cushion in the bottom of the inning on another run-scoring wild pitch, this one by Brett de Geus.

Seeking just a third win in 17 tries against the Giants this season, the Diamondbacks rallied within 6-4 in the eighth on an RBI single by Kole Calhoun and a sacrifice fly from David Peralta. However, Tyler Rogers struck out Ildemaro Vargas representing the potential tying run to end the inning.

Rookie Camilo Doval shook off a pinch-hit double by Geraldo Perdomo in the ninth for his first career save, allowing the Giants to keep pace with the Dodgers, whose win finished a few minutes earlier.

Jose Alvarez (5-2) was credited with the win in relief of Logan Webb, who was pulled after five innings, having allowed just one unearned run and four hits. Webb walked two and struck out six.

Sean Poppen (1-1), who gave up four runs, two earned, in his one-third of an inning, took the loss.

Arizona starter Luke Weaver exited a 1-1 game after four innings, charged with one run on three hits. He walked four and struck out six.

Posey had two hits for the Giants, who won without the benefit of a home run.

McCarthy, who also scored twice, and Calhoun had two hits apiece for the Diamondbacks, who were out-hit just 9-8.