The San Diego Padres stalled the San Francisco Giants’ division-clinching celebration Saturday afternoon, using a go-ahead double by Jake Cronenworth with two outs in the 10th inning for a 3-2 victory.

The loss left the Giants (106-55) still needing either one more win or one Los Angeles Dodgers defeat in order to claim their first National League West crown since 2012. The Dodgers played the Milwaukee Brewers on Saturday night.

Cronenworth’s hit came after Kervin Castro (1-1) had struck out Fernando Tatis Jr. with one out and a runner at third in the 10th. The Padres (79-82) snapped a seven-game losing streak.

But Giants manager Gabe Kapler then elected to have Castro walk Manny Machado, who had two earlier RBIs, in favor of bringing in left-hander Jarlin Garcia to face Cronenworth, whose grounder down the right-field line foiled the strategy.

Tim Hill (6-6), who pitched a 1-2-3 ninth, was credited with the win. Mark Melancon stranded extra-innings runner Mike Yastrzemski at third base by getting Wilmer Flores to pop up for the final out, earning his 39th save. 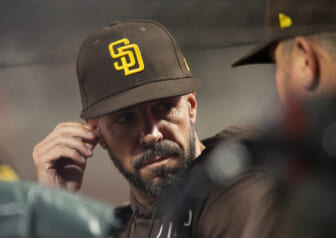 The teams alternated runs in the first eight innings, with San Francisco leading 1-0 after two frames and 2-1 after six.

The Padres threatened to take their first lead in the eighth when Tommy Pham singled and Trent Grisham doubled, putting the potential tying and go-ahead runs in scoring position.

Reliever Zack Littell then struck out Tatis, but Machado ended a nine-pitch at-bat with a sacrifice fly, tying the game.

Left-hander Jose Alvarez kept the score tied by getting Cronenworth to ground out.

The Giants’ first two runs were the products of an RBI single by Kris Bryant that followed a Brandon Crawford double in the second, and a solo home run by Austin Slater, his 12th, leading off the last of the sixth.

Slater’s go-ahead homer came immediately after singles by Adam Frazier, Tatis and Machado had plated San Diego’s first run in the top of the inning.

Giant starter Kevin Gausman worked seven innings, allowing one run and six hits. He walked one and struck out five.

The Padres’ Joe Musgrove limited the Giants to one run and three hits in his five innings. He struck out four and did not allow a walk.

Tatis, Jurickson Profar and Jake Marisnick had two hits each for the Padres, who out-hit the Giants 11-5.

Crawford’s double and Slater’s homer were the only extra-base hits of the game for the Giants.