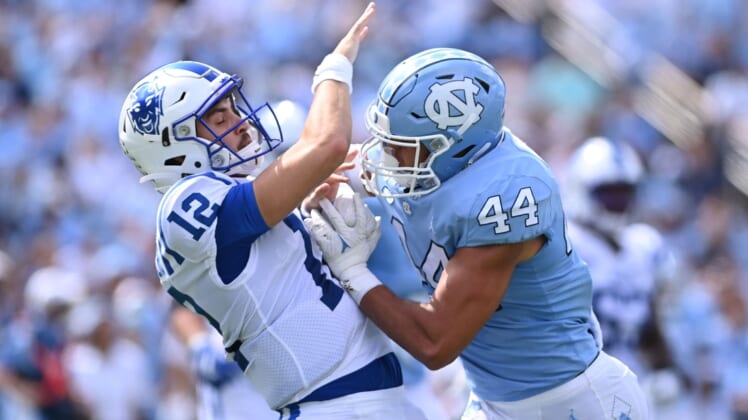 Sam Howell passed for 321 yards and three touchdowns as North Carolina got back on track with a 38-7 victory against visiting Duke on Saturday afternoon in Atlantic Coast Conference action in Chapel Hill, N.C.

Howell completed 18 of 32 passes without an interception, while the North Carolina defense straightened up after a rough outing a week earlier at Georgia Tech.

The Tar Heels (3-2, 2-2 ACC) claimed a 24-0 halftime lead on their way to a second victory by 20 or more points against a Coastal Division foe. Ty Chandler had a receiving touchdown and a rushing touchdown and Josh Downs caught six passes for 168 yards and a score.

Duke (3-2, 0-1), which won three consecutive games at home, stumbled on the road for the second time this year.

The Tar Heels keep the Victory Bell, which is the prize for the winner of the annual matchup between the neighboring rivals, after winning for the third straight time in the series. Mack Brown, who’s in his second stint as North Carolina’s coach, has directed victories in 11 straight meetings with Duke.

Duke’s Mataeo Durant ran for 114 yards on 19 carries, but he had only 20 yards after halftime.

Howell and Chandler hooked up for a 75-yard pass play in the final seconds of the first quarter for the game’s first points.

The Tar Heels doubled their lead about 90 seconds later when Duke quarterback Gunnar Holmberg fumbled and Trey Morrison returned the ball 63 yards for a touchdown.

Duke scored on the first snap of the second half on Holmberg’s 80-yard pass play to Jalon Calhoun.

The Blue Devils reached North Carolina territory in the third quarter with a chance to trim a 24-7 hole, but that drive fizzled.

Chandler added a 14-yard touchdown run in the fourth quarter before Howell’s 63-yard pass play to Josh Downs accounted for the last touchdown.

Holmberg completed 17 of 24 passes for 184 yards with one TD and one interception. Calhoun finished with 103 yards on six catches.