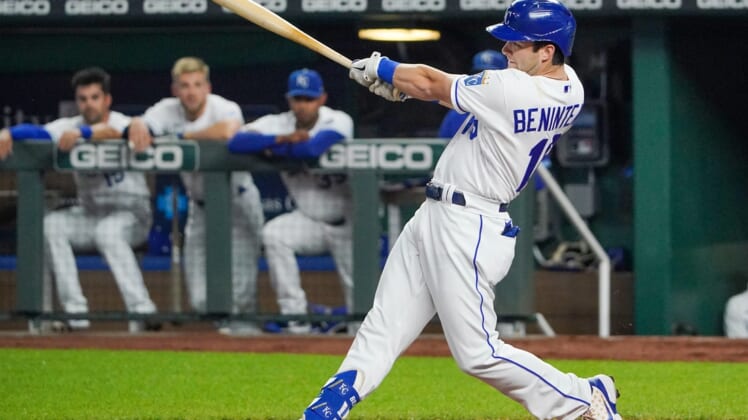 Perez, who went 2-for-3 with a walk and three runs, is now one home run shy of the Royals’ single-season record set by Jorge Soler in 2019.

Perez’s solo shot put Kansas City on top 4-3 in the sixth inning. After the Indians tied it in the top of the eighth, Nicky Lopez drove in the decisive run with a triple in the bottom of the inning. Lopez then scored on a wild pitch.

Josh Staumont (4-3) was the winning pitcher for the Royals (72-85) after retiring all four batters he faced. He was the seventh pitcher of the night for Kansas City.

Royals starter Brady Singer yielded three runs on three hits in two-thirds of an inning before leaving due to upper right arm discomfort. After Singer delivered a pitch, second baseman Whit Merrifield raced in from short right and motioned to the dugout. Ervin Santana took over on the mound and delivered three scoreless innings.

Franmil Reyes drove in the first two runs for the Indians in the first inning. Myles Straw led off with a double, Amed Rosario walked and Jose Ramirez singled to load the bases with no outs. Reyes singled to right, scoring Straw and Rosario. Ramirez scored on a double-play grounder.

The Royals answered with two runs in the bottom of the first. Perez drew a two-out walk and Andrew Benintendi homered to right to pull Kansas City within one run.

Perez led off the fourth with a double. He went to third on a flyout and then scored on Carlos Santana’s sacrifice fly to deep right.

Perez’s 429-foot home run came with one out in the sixth. He also leads the majors with 118 RBIs.

Indians pinch hitter Oscar Mercado singled with one out in the top of the eighth and scored on Yu Chang’s double.