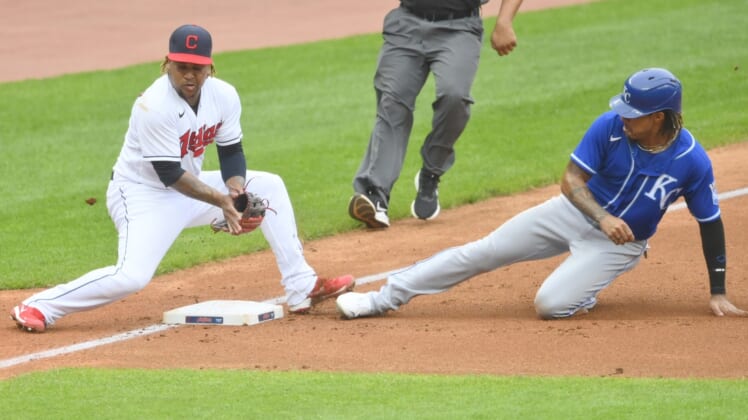 Salvador Perez set a major league record for homers in a season by a primary catcher after launching a two-run shot Monday as the visiting Kansas City Royals cruised to a 7-2 victory over the Cleveland Indians in the first game of a doubleheader.

Perez’s towering blast in the fifth inning was his 46th homer of the season, moving him past Hall of Famer Johnny Bench for the record. Bench had 45 homers in 1970.

Hunter Dozier joined Andrew Benintendi by belting a two-run homer before adding an RBI single in the fourth inning as the Royals (68-82) emphatically snapped an 11-game losing skid in the season series against the Indians (73-75). Kansas City posted its only other previous victory versus Cleveland this season with a 3-0 triumph on April 5.

Brady Singer (5-10) allowed two runs on six hits while pitching all seven innings in his return from a brief stint on the COVID-19 injured list.

Jose Ramirez, who was named American League Player of the Week earlier on Monday, had a two-run single in the fifth inning for the Indians.

Adalberto Mondesi singled to lead off the second inning before stealing both second and third base. He was able to trot home after Dozier deposited a 2-1 fastball from Triston McKenzie (5-7) into the bleachers in left field for his 14th homer of the season and third in his last seven games.

Kansas City doubled its advantage in the third inning.

Nicky Lopez singled to extend his career-best, on-base streak to 29 games games before Benintendi sent a first-pitch fastball from McKenzie over the wall in right-center field. Benintendi’s homer was his 16th of the season and first since he went deep on two occasions in a 6-4 win over the Minnesota Twins on Sept. 10.

Benintendi has driven in 23 runs this month after totaling 13 RBIs over July and August combined.

Dozier gave the Royals a 5-0 lead in the fourth inning after his RBI single to right field plated Michael A. Taylor.

Lopez led off the fifth inning with his second single of the day before Perez crushed a 1-2 slider from McKenzie over the wall in left-center field.

McKenzie finished by allowing seven runs and nine hits in 4 1/3 innings, striking out four against one walk.