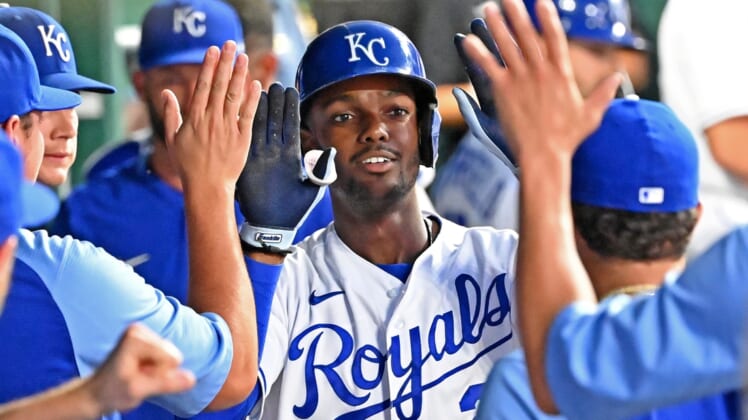 Salvador Perez hit a walk-off single to the wall in the ninth inning, capping a four-run rally as the Kansas City Royals defeated the visiting Cincinnati Reds 7-6 on Tuesday.

Down 6-3, Kansas City got the tying run on second with no outs in the ninth, without the benefit of a hit. Ryan O’Hearn walked and Hunter Dozier was hit by a pitch. Michael A. Taylor hit a ground ball that rolled through third baseman Eugenio Suarez’s legs, scoring O’Hearn and leaving runners at second and third.

Heath Hembree (2-4) took over on the mound for Brad Brach and struck out pinch hitter Jorge Soler. Nicky Lopez then flared a ball into short left field, scoring both runners. Lopez went to second on the throw, then advanced to third on a throwing error by left fielder Aristides Aquino.

Richard Lovelady (2-0) picked up the win after retiring the only batter he faced.

Kyle Farmer and Tyler Stephenson each had three hits for the Reds.

Cincinnati’s Luis Castillo turned in his fifth straight quality start but had nothing to show for it. He allowed one run on three hits over seven innings. Castillo walked one and struck out four.

After squandering a two-on, no-out scoring chance in the first inning, the Reds didn’t let an opportunity pass in the third. Jonathan India’s opposite-field double scored Shogo Akiyama with the first run of the game. Stephenson singled, and with two outs, Joey Votto looped a triple just beyond the reach of left fielder Benintendi, scoring India and Stephenson.

The Reds added two more runs in the fourth on Farmer’s seventh home run of the season. He pulled a curve-ball into the seats in left-center, scoring Tyler Naquin, who had singled.

Taylor’s leadoff home run in the fifth cut the Royals’ deficit to 5-1.

The Reds got that run back in the seventh on a broken-bat single by Eugenio Suarez, scoring Nick Castellanos, who had doubled.

The Royals drew within 6-3 on a Benintendi two-run home run off Cionel Perez in the eighth.