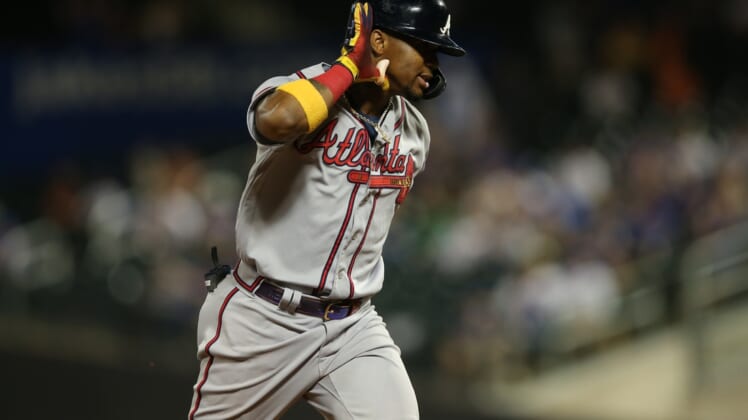 Ronald Acuna Jr. again homered for the lone run in a split-salvaging second game of a doubleheader Monday night, when his fifth-inning shot lifted the visiting Atlanta Braves to a 1-0 win over the New York Mets.

In the opener, Jacob deGrom allowed one hit over five scoreless innings and Dominic Smith had a three-run double in the fifth inning of the Mets’ 4-2 victory.

The Braves have won four of their six games. The Mets have lost five of seven.

On Sunday, Acuna homered in the third inning to provide the only run in the Braves’ 1-0 win in the second game of a doubleheader against the St. Louis Cardinals. Atlanta fell 9-1 in the first game.

In Monday’s second game, Acuna helped the Braves out with his glove before chipping in with the bat. The 23-year-old right fielder accounted for the first out of the second inning when he threw out Pete Alonso trying to advance to third on Smith’s single.

The Braves left the bases loaded in the first against Mets spot starter Jerad Eickhoff and stranded runners in each of the next three frames before Acuna greeted Miguel Castro (2-2) with a leadoff homer in the fifth.

The long ball wound up making a winner of Ian Anderson (5-3). The right-hander allowed three hits and one walk while striking out five over 5 1/3 innings. He exited following a double by Jonathan Villar, who was injured while racing to second.

The Mets promptly made baserunning mistakes on back-to-back pitches to help ensure Anderson stayed in line for the win following his departure. Pinch runner Jose Peraza was thrown out trying to advance to third on a grounder to short by Francisco Lindor, who was picked off first before Minter could throw a pitch to Jeff McNeil.

Will Smith earned his 14th save in eventful fashion by getting into and out of a bases-loaded jam in the seventh. Smith got Kevin Pillar to line out sharply to third for the second out before retiring pinch hitter Brandon Drury on a popup.

Eickhoff, making his Mets debut and his first appearance in the majors since 2019, allowed three hits and three walks while striking out three over four scoreless innings.