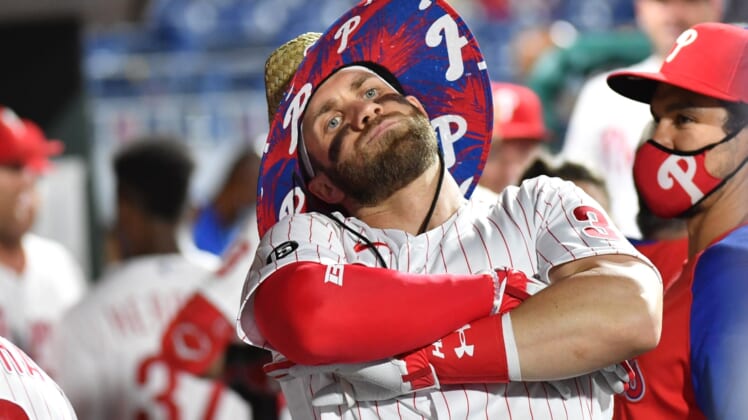 Ronald Acuna Jr. went 3-for-4 with three RBI, tying for the major-league lead with his 18th homer, as the Atlanta Braves rallied for a 9-5 win over the Philadelphia Phillies in Philadelphia on Tuesday night.

William Contreras and Austin Riley also collected three hits and homered. Riley tied the game in the eighth with his 11th homer of the year and Contreras snapped a 5-5 deadlock with an RBI single off reliever Sam Coonrod.

Acuna capped the outburst by pulling Coonrod’s 100 mph fastball into left field for a two-run single that gave Atlanta a four-run advantage.

Sean Newcomb (2-0) picked up the win for the Braves by working a scoreless seventh inning, while Connor Brogdon (4-2) was tagged with the loss after being charged with the first two runs of the eighth.

Neither starter made it past the fifth inning. Atlanta’s Drew Smyly lasted 4 1/3 innings, yielding five hits and three runs, two of which were earned, while walking three and fanning none. The Phillies’ Aaron Nola pitched five innings, allowing seven hits and four runs with two walks and seven strikeouts.

Riley initiated scoring in the first with an RBI double to the right-center wall that scored Ozzie Albies. Acuna made it 2-0 in the third when he ambushed Nola’s first-pitch fastball, driving it 460 feet into the second deck in left field.

Nola got Philadelphia on the board with a squeeze bunt in the third but gave the run back in the fourth when Contreras drilled his sixth homer of the season. Bryce Harper pulled the Phillies within 3-2 in the bottom of the fourth with his eighth homer of the year and his first since May 11.

Freddie Freeman’s run-scoring single in the fifth made it 4-2, but Jean Segura answered with an RBI double in the bottom of the fifth. Philadelphia grabbed a 5-4 edge in the sixth on J.T. Realmuto’s sixth homer of the season and Brad Miller’s RBI single.