Mahle (6-2) yielded a leadoff single to Raimel Tapia and a two-out walk to Charlie Blackmon to open the game but then retired the next 12 batters. In winning his fourth straight start, the right-hander tired in the sixth, allowing a run on a wild pitch before a three-run homer from Ryan McMahon.

The Rockies continue to be on the wrong side of history this season, falling to 5-25 on the road, by far the worst such mark in the majors.

Baseball’s best offensive 1-2 punch did it again for the Reds in the opening inning against Freeland.

Jesse Winker extended his hitting streak to eight games with an opposite-field single to left-center. Castellanos followed that up by also going opposite field, drilling a fastball 408-foot homer to right-center, his 13th home run of the season, to put Cincinnati ahead, 2-0.

Reds center fielder Scott Heineman came into Friday’s game with just one hit in 14 at-bats, a solo shot on May 22 against Milwaukee. He doubled his hit and homer totals with a long two-run homer to left off Freeland in the second for a 4-0 Cincinnati advantage.

Votto joined the home run parade with his second homer in as many games, a three-run opposite field blast several rows deep in left for a 7-0 Cincinnati lead. Votto’s seventh of the season was also his 1,934th hit with the Reds, tying Tony Perez for sixth all-time in franchise history.

Farmer connected off Freeland to open the fourth, while Stephenson added his fourth of the season to lead off the fifth and a 9-0 Cincinnati lead. 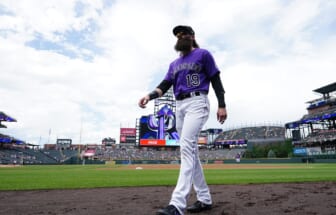 Freeland, who became the first MLB pitcher this season to allow five homers in a game, was finally pulled by Rockies manager Bud Black following the Stephenson homer.

The Reds, who placed their most consistent reliever — Tejay Antone — on the injured list before the game, removed Eugenio Suarez from the game for a pinch-hitter in the fifth before trainers tended to him in the dugout.