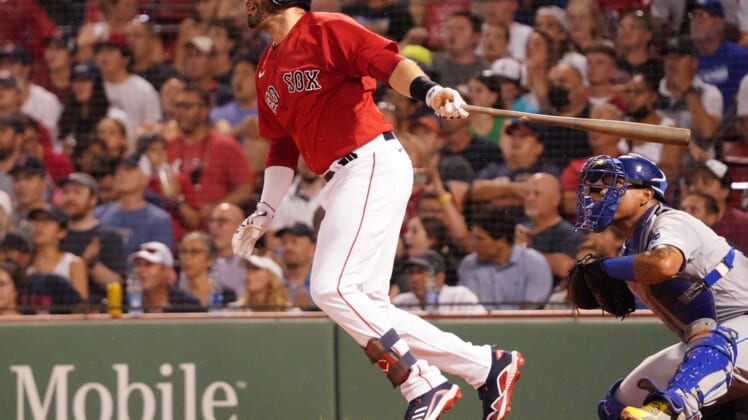 With the Red Sox trailing 1-0, Martinez put the hosts ahead for good on his 16th homer of the season with two outs in the third.

Perez (6-4) allowed seven hits, walked none and struck out two.

Boston’s Hunter Renfroe had a solo shot for his 12th home run of the year and finished with two RBIs, and Xander Bogaerts added an RBI.

Rain and thunderstorms delayed the first pitch by 30 minutes, and play was paused again for more than 90 minutes in the middle of the sixth inning.

Boston earned its major-league-leading 28th come-from-behind victory and its third straight over Kansas City. The Red Sox came from four runs down to win 6-5 in the series opener on Monday before erasing multiple one-run deficits in a 7-6 win on Tuesday.

Salvador Perez hit a solo shot for his team-leading 19th home run and Carlos Santana had an RBI for Kansas City. Royals starter Mike Minor (6-6) allowed five runs on seven hits with two walks and one strikeout over five innings.

Kansas City lost its eighth straight game and has dropped 20 of its past 24.

Salvador Perez led off the visiting second with a home run to put Kansas City ahead 1-0. Martinez answered an inning later when he launched a 2-1 Minor changeup to give Boston a 3-1 edge.

With a runner on third and two outs in the visiting fifth, Boston’s Enrique Hernandez made a highlight-reel diving catch in the center field triangle to preserve the two-run lead.

In the bottom of the fifth, Bogaerts hit an RBI single and Renfroe plated another run on a groundout to make it 5-1.

Renfroe’s homer after the delay in the eighth restored Boston’s four-run lead.