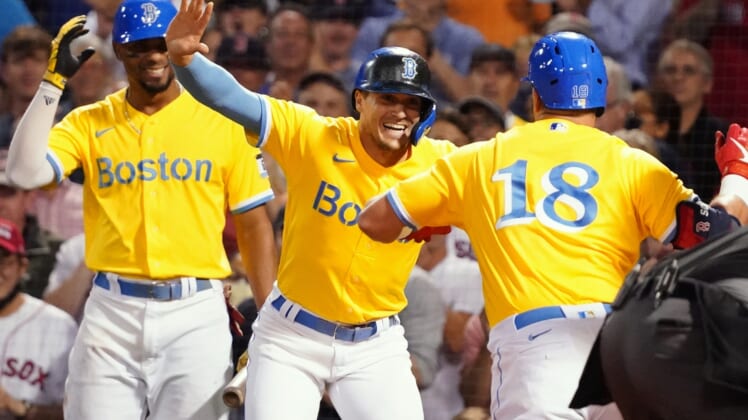 Kyle Schwarber smacked a pair of home runs and drove in four runs as the Boston Red Sox completed a two-game sweep of the visiting New York Mets with a 12-5 blowout victory on Wednesday night.

Schwarber had a three-run blast in the second inning after clubbing a solo shot in the first. Chris Sale improved to 5-0 after throwing five innings of two-run, six-hit ball with two walks and eight strikeouts for the Red Sox.

Alex Verdugo and Jose Iglesias each had a pair of RBIs for Boston (88-65), which earned its seventh straight win and remained two games ahead of New York Yankees for the top American League wild card spot.

Pete Alonso had a solo home run and Jeff McNeil, Francisco Lindor, James McCann and Luis Guillorme each drove in a run for the Mets (73-79). New York starter Taijuan Walker (7-11) surrendered six runs on six hits with a pair of walks and a strikeout in two innings.

New York has dropped seven of its last eight while falling 9 1/2 games behind St. Louis for the final NL wild card.

The Red Sox put the game away early with two runs in the first inning, four in the second and three more in the third.

Schwarber’s one-out blast for his 30th home run of the season put Boston on top 1-0. With his homer in the second-inning homer to make it 6-1, Schwarber improved to 5-for-10 with five home runs and seven RBIs in his career versus Walker.

Verdugo’s RBI double after Martinez doubled to open the third stretched the lead to 7-1. Iglesias scored on a “Little League home run” after tripling to plate a run and scoring on Javier Baez’s throwing error with two outs in the inning.

Alonso hit his team-leading 35th homer in the seventh inning for his second in as many games to make it 12-4.