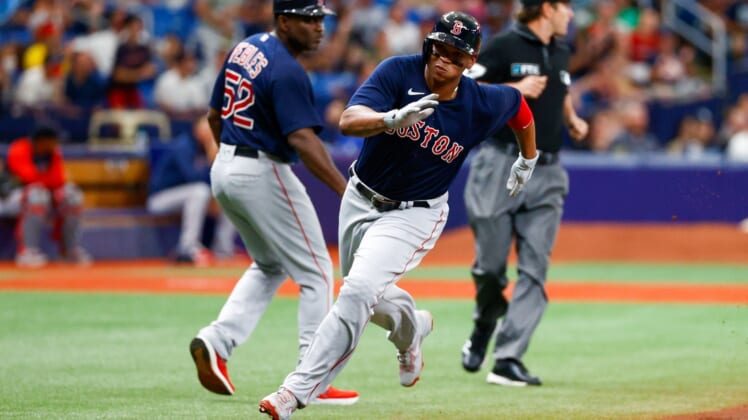 Wander Franco hit a tiebreaking RBI triple in the sixth inning, Ji-Man Choi and Francisco Mejia each had two-run homers, and the Tampa Bay Rays held off the visiting Boston Red Sox for a 9-5 win on Saturday night.

Mejia (2-for-4) drove in four runs and Franco (2-for-4) had two RBIs for Tampa Bay, which moved a half game ahead of Boston atop the American League East standings. Rays reliever Andrew Kittredge (7-1) earned the win after striking out three in a scoreless sixth inning.

Boston had held a share of first place in the division for 34 consecutive days coming in. Tampa Bay entered the three-game series 1 1/2 games back before earning a 7-3 victory in the series opener Friday.

Xander Bogaerts and Bobby Dalbec both clubbed two-run home runs for the Red Sox. J.D. Martinez also had an RBI for Boston, which has dropped three straight and four of its previous five games.

Red Sox starter Nathan Eovaldi (9-6) took the loss after giving up six runs (five earned) on six hits, with a walk and six strikeouts over 5 1/3 innings.

Rays starter Ryan Yarbrough did not factor in the decision after allowing five runs on four hits while walking one and striking out four in five innings.

Boston jumped ahead 3-0 in the first inning after Martinez’s RBI single and Bogaerts’ 16th homer of the year. Tampa Bay got two runs back in the home first, courtesy of Choi’s eighth long ball of the season.

Nelson Cruz reached on a fielding error in the third to plate the tying run. Mejia’s fifth homer of the year in the fourth put the Rays up 5-3 before Dalbec’s 11th homer in the fifth knotted the game at 5-5.

Following his RBI triple in the sixth, Franco added an RBI single in the eighth before Mejia knocked a two-run single.