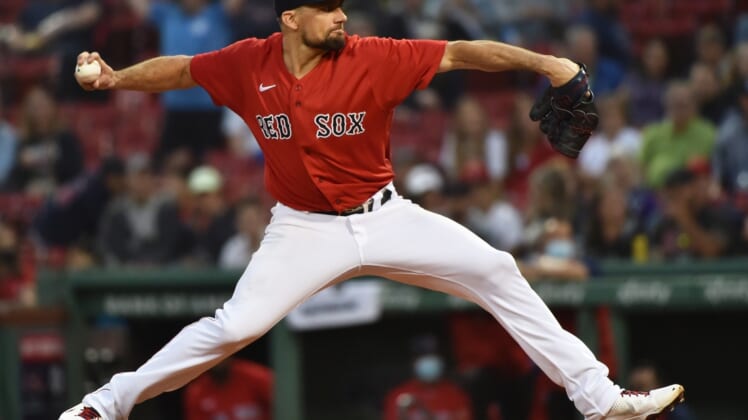 Rafael Devers singled high off the Green Monster in left-center to drive in the winning run in the ninth inning as the Boston Red Sox overcame a blown lead and beat the visiting Toronto Blue Jays 2-1 Monday night.

Vladimir Guerrero Jr. homered with two outs in the ninth off Red Sox closer Matt Barnes to knot the score at 1.

Alex Verdugo and J.D. Martinez singled to start the bottom of the inning against Rafael Dolis (1-3) to set up Devers’ clutch hit with one out.

Barnes (3-1) earned the win, striking out the side around Guerrero’s homer. Boston snapped a two-game skid to salvage a split of the four-game series.

Toronto’s bats went cold after the team slugged eight home runs in an 18-4 victory Sunday. The Blue Jays were held to four hits, three of them singles.

Guerrero homered in all four games of the series to push his major-league-leading total to 22.

Eovaldi gave up three hits and a walk while striking out four.

Blue Jays rookie Alek Manoah allowed one run on four hits and a walk over six innings in his fourth career start. He punched out five.

The contest was scoreless until Boston broke through in the third.

With Enrique Hernandez on first after beating out a potential inning-ending double-play ball, Verdugo hit a towering fly ball to left that bounced off Lourdes Gurriel Jr.’s glove up against the left field wall for a 1-0 lead.

Eovaldi kept the Blue Jays off base until Bo Bichette’s single with one out in the fourth.

The first two Toronto batters reached on singles in the seventh before Eovaldi got Randal Grichuk to ground into a double play. Josh Taylor then took over on the mound and struck out Rowdy Tellez to end the inning.

Taylor stayed on and retired the side in order in the eighth, whiffing two.