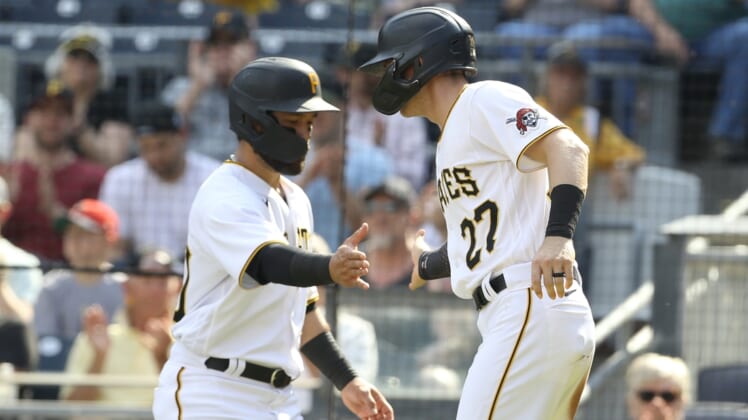 Jacob Stallings’ RBI single in the 12th inning Saturday gave the Pittsburgh Pirates an 8-7 win over the visiting Miami Marlins.

Against reliever Adam Cimber (1-2), Adam Frazier started at second and moved to third on Ke’Bryan Hayes’ fly to center. Bryan Reynolds was intentionally walked before Stallings singled to center.

It was Stallings’ fifth career walk-off hit and his second game-winning hit of the series.

Frazier added a two-run single for the Pirates, who have won the first three games of the four-game series.

Jesus Aguilar was 4-for-6 with a homer and an RBI single, and Jazz Chisholm Jr. and Jorge Alfaro also homered for Miami, which has lost eight straight.

Kevin Newman drew a one-out walk in the second inning and went to second on Ka’ai Tom’s single. De Jong bunted them to second and third in front of Frazier’s two-run single to left for a 2-0 Pirates lead.

Aguilar led off the fourth with his 11th homer to pull Miami to within 2-1. Corey Dickerson doubled an out before Chisholm Jr. hit his seventh homer to put the Marlins ahead 3-2.

In the fifth, Aguilar singled with one out. After Dickerson struck out, and Alfaro blasted a homer to center to push the lead to 5-2.

In the eighth, Pittsburgh loaded the bases against reliever Anthony Bass. Anthony Bender entered and walked Newman to force in a run to make it 5-3, then hit Tom to cut it to 5-4. Michael Perez reached when his grounder was bobbled by Bender for an error, allowing two runs to score for a 6-5 Pirates lead.

The Marlins tied it 6-6 in the ninth against Richard Rodriguez on Magneuris Sierra’s single, Starling Marte’s walk and, an out later, Aguilar’s RBI single.