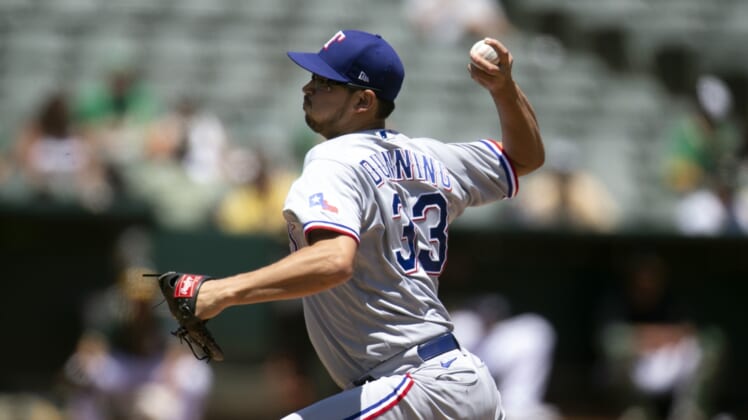 Right-hander Dane Dunning got the ball rolling on a combined five-hitter and Joey Gallo continued his power-hitting rampage with his seventh home run in the last five games Thursday afternoon as the visiting Texas Rangers thumped the Oakland Athletics 8-3.

Nate Lowe hit two homers and John Hicks celebrated a recent promotion with a home run in his third big-league at-bat of the season, helping the American League West last-place Rangers continue to be a thorn in the side of the second-place A’s.

In a seven-game, two-site sequence over the last 11 days, the Rangers earned a 4-3 advantage by taking the first and last games, with the clubs alternating wins and losses in between.

Dunning, whose last appearance in Oakland was when he faced just four batters as the starter in Game 3 of the American League Wild Card series for the Chicago White Sox last season, went four innings this time, shutting out the A’s on three hits and two walks. He struck out four.

With Dunning not having pitched the minimum requirement of five innings in order to be eligible for a win, the decision fell onto the lap of lefty John King (6-5), who worked three shutout innings before the A’s finally got on the board in a three-run eighth.

Gallo’s homer, his 20th of the season, came in the fifth inning after he had earlier singled twice off A’s starter Sean Manaea (6-5).

In going deep for the seventh time in the last five games, he became the first major-leaguer to homer in five straight contests this season, and became the first Ranger to do so since Mike Napoli in 2012.

Gallo’s first hit, which followed an Adolis Garcia double, opened the Texas scoring in the first.

After that, the Rangers scored their next six runs on homers, with Lowe hitting his first of the game in the fourth, Gallo his two-run shot in the fifth, Hicks a leadoff shot in the sixth and Lowe following a Gallo walk with a two-run blast, his 12th of the season, in the seventh for a 7-0 lead.

Manaea, who had gone 6-0 in his last eight starts against the Rangers, was lifted after five innings, charged with four runs on nine hits. He walked one and struck out six.

Chad Pinder had an RBI double in Oakland’s three-run eighth.