WATCH: Pirates walk away with win over Braves in ninth inning 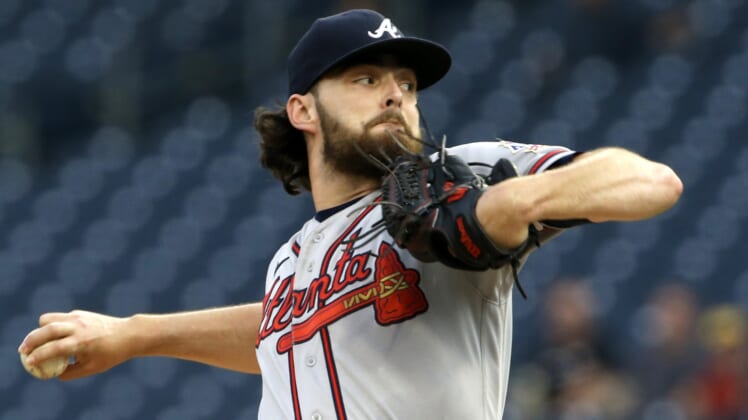 Bryan Reynolds drew a bases-loaded walk in the ninth inning Tuesday to lift the Pittsburgh Pirates to their third straight win, 2-1 over the visiting Atlanta Braves.

Rodolfo Castro led off the bottom of the ninth by drawing a walk from Tyler Matzek (0-3) — his first time on base in the big leagues. Adam Frazier singled to left, advancing Castro to second. Ke’Bryan Hayes walked to load the bases, and Reynolds took advantage of Matzek’s lack of command to draw a walk and force in Castro.

Reynolds also had a sacrifice fly as he accounted for both RBIs for Pittsburgh.

Orlando Arcia homered for the Braves, who have lost three of their past four games.

Atlanta played without infielder Pablo Sandoval, who was placed on the restricted list for what manager Brian Snitker labeled a personal matter.

Pittsburgh was without right fielder Gregory Polanco, who had been limited to occasional pinch-hitting duty lately before being placed on the 10-day injured list Tuesday because of a bilateral adductor strain.

The Pirates took a 1-0 lead in the third. Frazier led off with a single up the middle. Hayes hit the first of his two doubles, sending Frazier to third, and Reynolds followed with a sacrifice fly to center.

In the fifth with two outs, Arcia smacked his first homer of the year and as a member of the Braves, a 430-foot shot to left for a 1-1 tie.

In the eighth with two outs, Pittsburgh’s John Nogowski clobbered a ball that cleared the foul pole in left, but it was ruled just foul. The Pirates then loaded the bases against A.J. Minter on singles by Nogowski and Wilmer Difo and a walk to Michael Perez, but Jared Oliva’s meek chopper went for a fielder’s choice, with Nogowski tagged out on his way home.