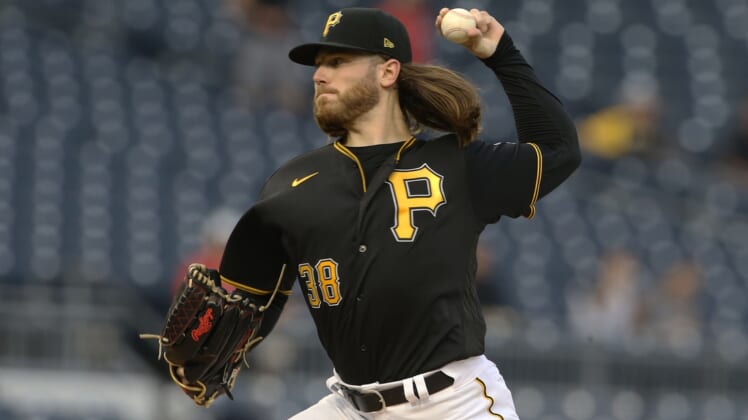 Jacob Stallings and Yoshi Tsutsugo each knocked in two runs Tuesday as the Pittsburgh Pirates built a six-run lead and squeaked by the visiting Cincinnati Reds 6-5.

Ben Gamel added an RBI single for the Pirates (53-91), who have won five of their past seven games.

Chris Stratton gave up a run in the ninth but hung on for his fifth save.

Cincinnati starter Wade Miley (12-6), who had compiled 13 scoreless innings in two previous starts against Pittsburgh this year, gave up six runs and 10 hits in 4 1/3 innings, with two walks and one strikeout.

Pittsburgh took a 3-0 lead in the first. Ke’Bryan Hayes singled up the middle and went to second on Kevin Newman’s sacrifice bunt. Bryan Reynolds walked. Tsutsugo drove in Hayes with a base hit to right.

Stallings’ RBI single to right made it 2-0. After Anthony Alford reached on Eugenio Suarez’s error at second, Gamel followed with an RBI single.

In the fifth, Newman singled to center. Reynolds walked again. Tsutsugo’s single to center brought Newman in, and Reynolds scooted home on Aristides Aquino’s errant throw from left to third, giving the Pirates a 5-0 lead. Stallings’ double to left made it 6-0.

Against Pittsburgh reliever Nick Mears in the sixth, Joey Votto walked. Suarez singled him to second. After Aquino struck out, Max Schrock singled to right to load the bases. Barnhart hit a pop single that dropped into right-center to drive in two to close it to 6-2.

Pinch-hitter Mike Moustakas singled to right-center to again load the bases. Schrock scored on Jonathan India’s fielder’s choice to make it 6-3. Farmer, just off paternity leave, singled to right to drive in Barnhart, and it was 6-4.

Castellanos’ 29th homer, to right-center with two outs, made it 6-5 in the ninth.