WATCH: Phillies hang on to win rubber game vs. Orioles 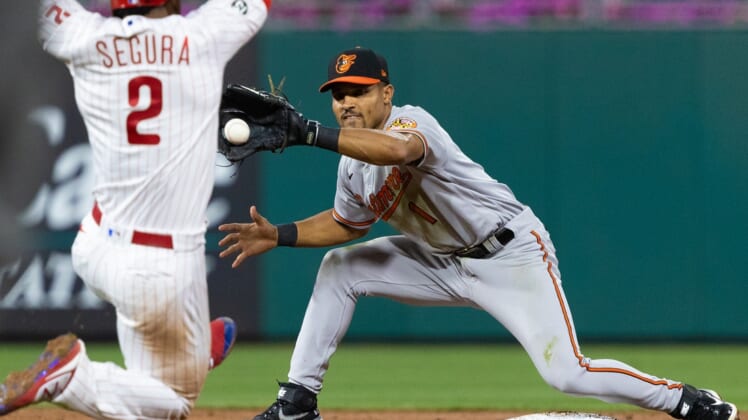 Andrew McCutchen homered and Jean Segura delivered a go-ahead sacrifice fly to lift the host Philadelphia Phillies past the Baltimore Orioles 4-3 on Wednesday.

Segura added two hits, while Matt Vierling also had two hits for the Phillies, who won their second in a row.

The Phillies (78-74) began the night three games behind the Atlanta Braves for first place in the National League East.

Jose Alvarado (7-1) earned the win in relief and Ian Kennedy picked up his 25th save with a scoreless ninth inning despite allowing two walks.

Baltimore starter Keegan Akin allowed five hits and one run with six strikeouts and one walk in 5 1/3 innings.

Baltimore’s Cedric Mullins tripled with two outs in the third inning but was stranded when Ryan Mountcastle struck out.

The Phillies came up with four hits through the first five innings but were unable to score.

In the sixth, Mountcastle walked with one out and Austin Hays followed with an RBI double for a 1-0 lead. Pedro Severino and Ryan McKenna both struck out looking to end the inning.

Segura grounded out to open the bottom of the sixth and Bryce Harper singled to right. J.T. Realmuto flied out to center, but McCutchen picked him up with a two-run homer, his 25th of the season, for a 2-1 advantage.

The Orioles tied the game at 2-2 in the seventh when pinch hitter Trey Mancini provided an RBI groundout.

The Phillies regained a 4-2 lead in the bottom of the seventh when Segura lofted a sacrifice fly to center and Realmuto added an RBI single.

Baltimore closed within 4-3 in the eighth when Severino lined an RBI double to right. Harper then threw out Severino at home on a potential tying RBI single by Valaika.