J.T. Realmuto’s two-run homer in the 10th inning Sunday lifted the Philadelphia Phillies to a 4-2 victory against the visiting Miami Marlins in a game that was suspended Saturday night due to rain.

Jose Alvarado (6-0) retired the Marlins in order in the top of the 10th to begin play Sunday. With Travis Jankowski at third base and one out, Realmuto hit his ninth homer of the season to right field off Yimi Garcia (3-7).

Philadelphia had a chance to win the game 2-0 in the ninth on Saturday night before Miami’s Jesus Aguilar pulled a 390-foot homer to left, tying the score. Ranger Suarez allowed the homer.

It was the 23rd blown save of the season for the Phillies — two short of the franchise record.

Philadelphia’s Vince Velasquez tossed five scoreless innings, allowing just one hit and two walks. He left after a 25-minute rain delay in the bottom of the fifth inning.

Still, in 18 innings against the Marlins this year, Velasquez has allowed just six hits and no runs. His ERA this year against the rest of the majors is 6.55. 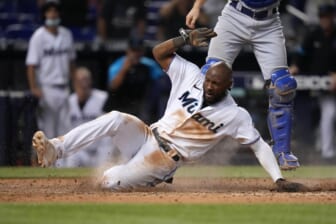 The Phillies threatened in the fourth as Hoskins drew a walk and went to third on Didi Gregorius’ single. However, Ronald Torreyes grounded into an inning-ending double play.

In the fifth, the Phillies’ Travis Jankowski singled and reached third with one out, but he was stranded as Segura struck out, and Realmuto grounded out to reliever John Curtiss.

Harper doubled and then stole third with one in the sixth before getting stranded.

Miami, which had not reached third base to that point, finally broke through in the top of the ninth as Marte singled, and Aguilar followed with his homer on an 0-1 changeup that was low in the zone.

The Marlins forced extra innings thanks to a pair of stellar fielding plays in the bottom of the ninth, one on a grounder to Rojas and one on right fielder Monte Harrison’s diving catch.