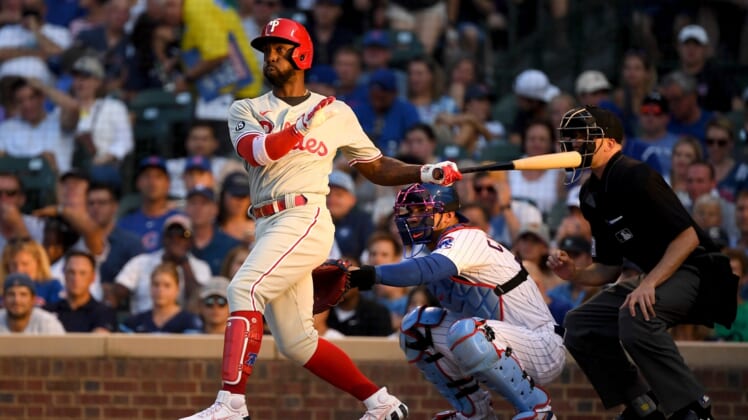 Odubel Herrera homered and drove in three runs, Andrew Knapp and Didi Gregorius each added a home run and the Philadelphia Phillies routed the host Chicago Cubs 13-3 on Monday.

Javier Baez homered, doubled and drove in two runs and Jake Marisnick homered for the reeling Cubs, who have lost 10 in a row.

The Cubs loaded the bases with one out in the first inning but couldn’t capitalize as Moore struck out Patrick Wisdom and Joc Pederson.

In the second, Marisnick opened with a solo home run to center field for a 1-0 Cubs lead. The Phillies tied the game at 1 in the third when Knapp launched a solo homer to right.

Chicago went ahead 2-1 in the bottom of the third when Baez hit an RBI double to deep center. Gregorius homered in the fourth and the Phillies equalized at 2.

Philadelphia took a 4-2 advantage in the sixth following McCutchen’s RBI double and an RBI single by Rhys Hoskins.

Cubs manager David Ross was ejected in the sixth by home plate umpire Nic Lentz for arguing after Harper was walked. It was Ross’ third ejection this season.

Bohm was walked with the bases loaded by Kohl Stewart to take a 5-2 lead in the eighth. The Phillies added five more runs, highlighted by Herrera’s three-run homer. Herrera snapped an 0-for-13 drought.

Hoskins and Bohm each hit a home run off position player Eric Sogard in the ninth.