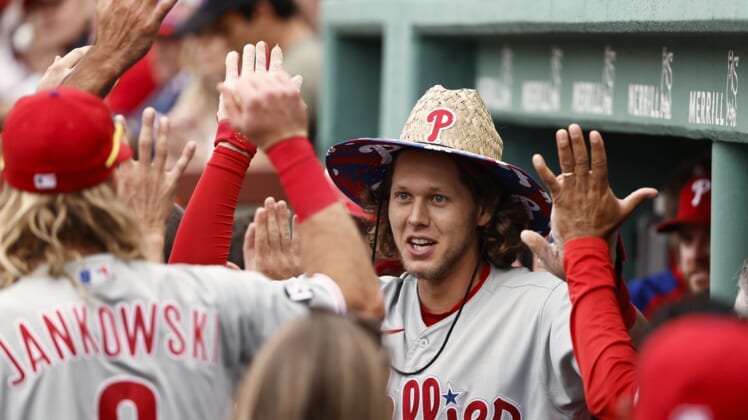 Jean Segura led off with a home run and added a two-run single during an eight-run eighth inning, leading the Philadelphia Phillies in an 11-2 blowout win over the host Boston Red Sox on Saturday.

Segura (3-for-5) paced a 13-hit attack as the Phillies bounced back from an 11-5 loss in Friday’s series opener. Alec Bohm hit a two-run homer, and Bryce Harper and Rhys Hoskins also finished with two RBIs.

Xander Bogaerts homered for the Red Sox, who have dropped three of four. Boston was held to four hits.

Philadelphia entered the eighth leading 3-2 before sending 13 men to the plate in the inning to blow the game open. Hoskins and Harper each hit two-run doubles to highlight the outburst.

Red Sox reliever Josh Taylor was tagged for four runs in the frame to end his streak of 26 consecutive scoreless appearances.

Segura got Philadelphia on the board from the jump, taking the eighth pitch from Boston starter Martin Perez over the Green Monster in left field and out of Fenway Park. Perez ran into trouble again in the second, when Hoskins worked a leadoff walk and scored on Bohm’s homer to left for a 3-0 Phillies’ lead.

Bogaerts’ blast off Matt Moore leading off the bottom of the frame got the Red Sox within 3-1.

Moore had two on and two out in the third when catcher Andrew Knapp’s pickoff attempt at first went down the right-field line to allow Christian Vazquez to cross the plate and make it 3-2. After J.D. Martinez and Bogaerts walked to load the bases, Rafael Devers flew out to left to end the threat.

Perez (7-5) was removed after putting two men on with two outs in the fourth. He allowed three runs on six hits, walking two and striking out four.