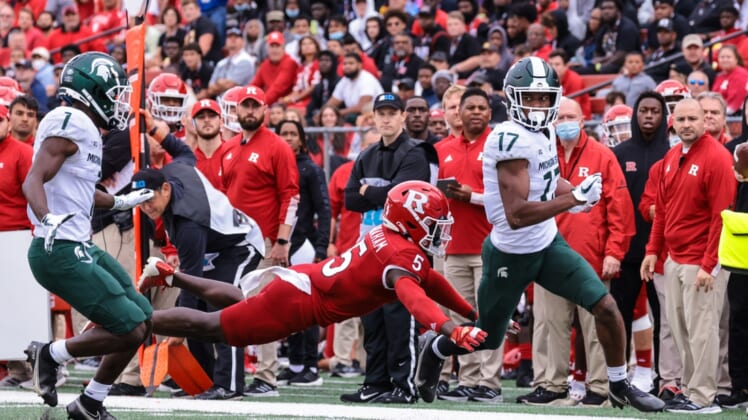 Payton Thorne connected with Jalen Nailor on three long touchdown passes in the first half to pace No. 11 Michigan State to a 31-13 win over Rutgers on Saturday in Piscataway, N.J.

Kenneth Walker III rushed for 233 yards on 29 carries. His 94-yard touchdown run in the second half was the longest play from scrimmage in school history.

Michigan State, which became bowl eligible, finished with 599 yards of total offense. The defense held Rutgers to 2.8 yards per carry.

Rutgers (3-3, 0-3) was facing its third straight ranked opponents, all in the Big Ten.

Nailor’s first touchdown came on a 63-yard connection with Thorne in which he beat one-on-one coverage.

Nailor’s second 63-yard scoring reception included a nifty move to elude multiple defenders. He caught the ball along the right sideline, then cut toward the middle with 10:18 left in the half.

A Spartans fumble set up Ambrosio’s 29-yard field goal but Michigan State needed just one play from scrimmage to answer that score. This time, Thorne connected with Nailor, who entered the game with 269 receiving yards and three touchdowns, on a 65-yard pass play.

Walker, who entered the week leading the FBS in rushing yards, gave the Spartans some breathing room midway through the third quarter with his 94-yard run. He burst through the middle, eluded a trio of defenders near his own 30-yard line and raced into the end zone.