May 21, 2021; Edmonton, Alberta, CAN; Winnipeg Jets defensemen Logan Stanley (64) and Edmonton Oilers forward Alex Chiasson (39) battle for position during the first period in game two of the first round of the 2021 Stanley Cup Playoffs at Rogers Place. Mandatory Credit: Perry Nelson-USA TODAY Sports

Paul Stastny was the overtime hero with the game’s lone goal that gave the visiting Winnipeg Jets a 1-0 victory over the Edmonton Oilers on Friday and a 2-0 lead in their opening-round playoff series.

The series heads to Winnipeg for games Sunday and Monday. The Jets took the series opener 4-1 and now boast a glorious chance to take a commanding lead in the series.

Stastny took a pass from Andrew Copp as he entered the offensive zone, and with a pair of defenders between him and the net, sent a long wrist shot from beyond the right circle that found the mark 4:06 into the extra frame. It’s Stastny’s second career Stanley Cup playoff overtime goal.

Edmonton’s dynamic duo of Connor McDavid and Leon Draisaitl were held without a point for the second consecutive game. They played on the same line after both were blanked in the opener.

The expectations of high-scoring hockey hasn’t come to fruition yet in the series, although the goaltenders had their say in keeping pucks out of the net in this one.

Smith was called upon especially in the first half of the game. He made two clutch stops Kyle Connor late in the opening frame, the first when Connor was alone in the slot and the second on the rebound. Smith also provided a couple of notable saves on Copp before the midway point. 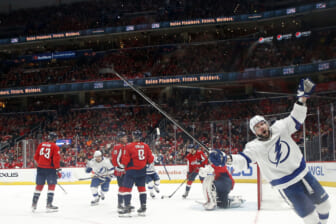 Hellebuyck, the reigning Vezina Trophy winner, didn’t see as many high-danger chances until later in the game. Hellebuyck’s biggest save came when he denied Darnell Nurse from the doorstep late in the second period.

Naturally, both teams were blocking plenty of shots, and the most eye-catching block came during a crazy scramble early in the third period when Winnipeg defenseman Dylan DeMelo threw his hands in the air while sprawling around to deny McDavid’s golden chance during an Edmonton power-play. DeMelo went to the locker room afterward but returned to finish the game.

The Jets also received positive news before puck drop with center Pierre-Luc Dubois returning from the injury that sidelined him in the opener.

Nikolaj Ehlers, another forward, who has missed 11 consecutive games, remains out but could play when they resume in Winnipeg.