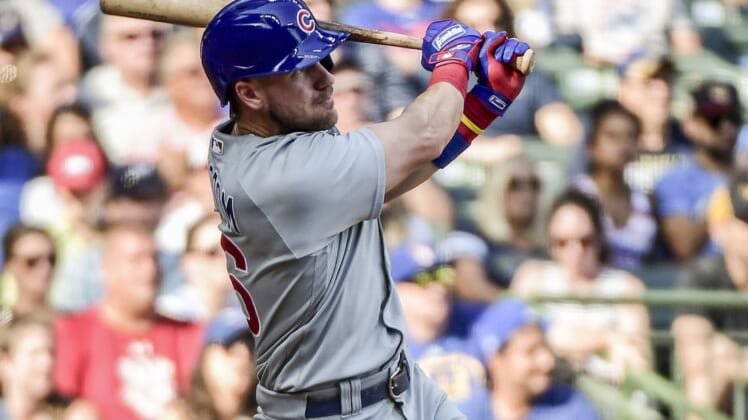 Patrick Wisdom’s three-run home run capped a five-run eighth inning and the Chicago Cubs held on for a 6-4 victory over Milwaukee on Sunday, delaying the host Brewers’ quest for a division title.

The Cubs, who had lost 11 straight against Milwaukee, erased a 2-1 deficit in the eighth. Pinch-hitter Willson Contreras drew a lead-off walk from Brad Boxberger (5-4), who came on to open the inning. Matt Duffy followed with an RBI double down the left-field line. Frank Schwindel followed with a run-scoring double to left-center.

Jandel Gustave relieved Boxberger and walked David Bote. Wisdom, who struck out in his first three at-bats, then sent a 2-1 pitch 430 feet to center for his 27th homer, the most in a single season by a Cubs rookie. Kris Bryant had 26 homers as a rookie in 2015.

Milwaukee scored two in the ninth and left the bases loaded. Christian Yelich followed a pair of walks with a two-run single with two outs off Rowan Wick to make it 6-4. Omar Narvaez followed with a single and both runners advanced on a wild pitch. Luis Urias walked to load the bases. Michael Rucker entered for Chicago and retired Jace Peterson on a fly out to deep center.

Adam Morgan (1-0) pitched a scoreless seventh for the victory. Codi Heuer tossed a perfect eighth. Rucker got the one-out save, his first.

Milwaukee’s magic number remained at three over St. Louis in the NL Central. The Brewers (91-58), who secured a playoff spot on Saturday, lead the Cardinals by 11 1/2 games. St. Louis, which leads the tightly contested chase for the second wild card spot, opens a four-game series Monday at Milwaukee. The Cardinals defeated San Diego 8-7 on Sunday for their eighth consecutive victory.

Brewers starter Eric Lauer allowed just one hit in 5 1/3 innings. It was Trayce Thompson’s one-out solo homer in the fifth, his first since 2018 when he was with the White Sox.

The Brewers answered in the bottom of the fifth with two runs off Adrian Sampson for a 2-1 lead. Jackie Bradley Jr., who had one hit in his last 34 at-bats and hitless in his last 18, walked to open. Kolten Wong and Eduardo Escobar followed with consecutive RBI doubles.