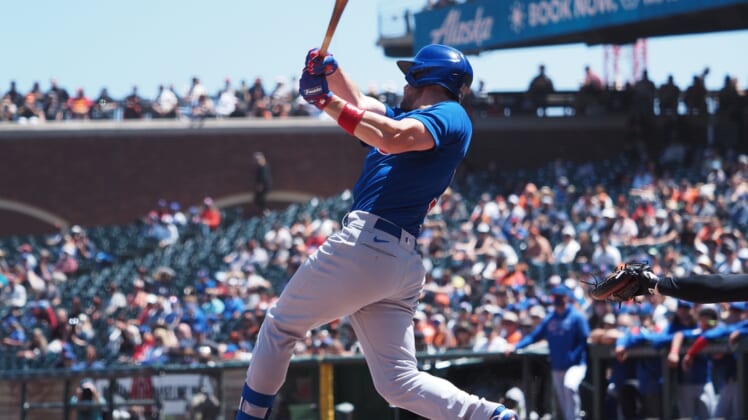 Patrick Wisdom hit a pair of home runs to continue his torrid start to the season, and the Chicago Cubs rallied for a 4-3 win over the host San Francisco Giants on Sunday afternoon.

Wisdom’s multi-homer performance gave him seven home runs in only 13 games this season. The 29-year-old helped the Cubs salvage the series finale and avoid a four-game sweep.

LaMonte Wade Jr. homered for the Giants, who lost for only the second time in their last nine contests. Buster Posey and Donovan Solano had one RBI apiece for San Francisco.

Craig Kimbrel pitched a scoreless ninth to pick up his 14th save.

The Giants grabbed a 2-0 lead in the bottom of the first. Wade opened the frame with a solo shot to left field for his third home run, and Solano delivered an RBI single to right field later in the inning to drive in Posey.

The Cubs cut the deficit to 2-1 in the second on Wisdom’s solo home run to center field.

An RBI double by Posey increased San Francisco’s lead to 3-1 during the bottom of the second. His drive to deep right-center field scored Mauricio Dubon, who reached base on a leadoff double and advanced to third on a groundout by Cueto.

In the fourth, Wisdom struck again to even the score at 3. He belted a two-run shot an estimated 422 feet to center field for his second homer of the game.

An error by Posey allowed the Cubs to take a 4-3 lead in the fifth. The miscue allowed Hendricks to score on a fielder’s choice groundout by Javier Baez.

Dubon nearly tied the game in the ninth with a deep drive. Cubs left fielder Kris Bryant followed the ball to the warning track and reached up to make the catch.