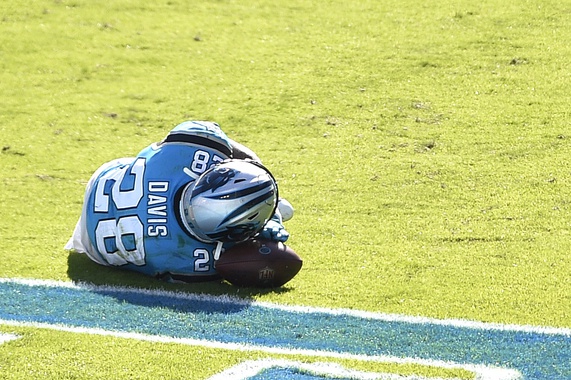 Carolina Panthers running back Mike Davis has played well in injured Christian McCaffrey’s stead thus far this season. Davis was back up to his old tricks against a bad Atlanta Falcons defense on “Thursday Night Football.”

However, it’s this one play that will define the veteran’s evening. Check out Davis run directly into the butt of his teammate, offensive lineman Taylor Moton.

Davis almost literally recreated the infamous Mark Sanchez butt fumble. If that had come to fruition, it would have brought the social media world to a standstill.

Carolina is attempting to move to 4-3 on the season against the one-win Falcons. Plays like this obviously will not help first-year head coach Matt Rhule and Co. accomplish that goal.

As for Davis, he entered Week 8’s action having put up 517 total yards and four touchdowns at a clip of 5.7 yards per touch in seven games. This one play won’t change how well he’s played this season.