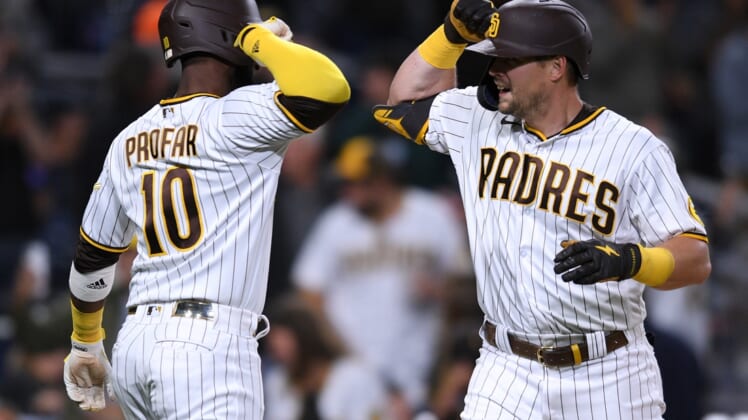 Machado had two sacrifice flies before triggering a three-run eighth with a lead-off homer — after Cubs first baseman Anthony Rizzo dropped his foul popup for an error — off Cubs reliever Cory Abbott.

O’Grady, who was called up from Triple-A El Paso earlier in the day, hit a two-run homer off Cubs starter Adbert Alzolay in the third, and doubled home the Padres’ final run in the eighth.

Ryan Weathers (3-2) picked up the win despite allowing three runs on five hits in five innings. He walked one and struck out four.

Alzolay (4-5) took the loss, giving up four runs on five hits and five walks before leaving the game due to a blister one hitter into the fourth. He struck out four.

The Padres again struggled with runners on base, going 0-for-9 until Eric Hosmer’s RBI single in the eighth. San Diego twice left the bases loaded while ending a two-game losing streak.

The Cubs, meanwhile, fell to 1-4 since sweeping the Padres in a three-game series last week at Wrigley Field.

The Padres scored four of their runs on Machado’s two sacrifice flies and two ground outs.

San Diego loaded the bases before Alzolay could retire a hitter in the first. But the only run they scored in the inning came on a groundout by Hosmer.

San Diego made it 2-0 in the second on a double by Victor Caratini, a balk and Machado’s sacrifice fly to left.

In the third, O’Grady followed a two-out walk drawn by Jurickson Profar with his first homer of the season and third of his career.

The Cubs rallied in the fourth, loading the bases with none out against Weathers on back-to-back singles by Kris Bryant and Anthony Rizzo and a walk to Patrick Wisdom.

Jake Marisnick then hit a slow roller up the first base line. Weathers fielded the ball but threw it past Hosmer, allowing Bryant and Rizzo to score on the hit and error. The Cubs bunted the runners into scoring position and pulled to within a run of the lead when Wisdom scored on Sergio Alcantara’s sacrifice fly.

The Padres regained control with two runs in the sixth.

Cubs reliever Keegan Thompson issued back-to-back walks to Caratini and pinch-hitter Ha-Seong Kim with one out, and then advanced both with a wild pitch. Caratini scored on a fielder’s choice grounder by Tommy Pham, and Kim scored on Machado’s second sacrifice fly to make it 5-3.