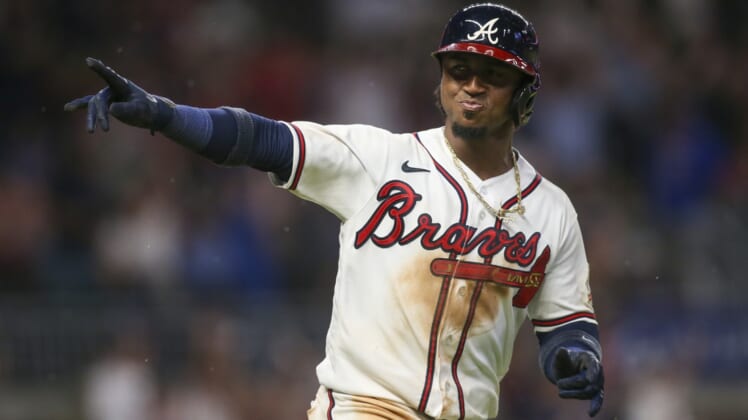 Second baseman Ozzie Albies had five hits, including a pair of home runs, and drove in seven runs to help the Atlanta Braves break out of a lengthy offensive drought and blow out the visiting New York Mets 20-2 on Wednesday.

Albies was 5-for-6 and scored four runs for Atlanta, which had scored three or fewer runs in 10 of its last 11 games. He has 43 extra-base hits, second to Nick Castellanos’ 44 in the National League.

Freeman scored four runs, giving him 902 for his career, making him the sixth Braves player to have 900 career RBIs and 900 career runs scored.

The winning pitcher was Max Fried (5-4), who returned from spending 10 days on the injured list with a blister on his left index finger. He went five innings and allowed two runs on three hits, with two walks and seven strikeouts. Both runs came on Pete Alonso’s first-inning homer, his 13th of the season.

New York starter David Peterson (2-6) was rocked for six runs (five earned) on eight hits, one walk and two strikeouts in three innings. He left the game in the fourth inning because of right side soreness.

Down 2-0, the Braves scored twice in the home half of the first on a leadoff homer by Ronald Acuna Jr., his 22nd home run of the season, and an RBI single by Albies. Atlanta tacked on two more in the third on Riley’s two-run single.

The Braves erupted for seven runs in the fourth on RBI singles from Kevan Smith, Freeman, Albies and Riley, a double from Guillermo Heredia and an infield grounder from Abraham Almonte.

Ehire Adrianza hit a pinch-hit homer in the seventh.