Ryan Mountcastle hit a two-run homer in the seventh inning and the Baltimore Orioles rallied past the visiting Cleveland Indians 3-1 on Friday night for their third straight win.

Cole Sulser (2-0) pitched a scoreless seventh inning for the win, Tanner Scott struck out the side in the eighth, and Paul Fry worked around a pair of hits in the ninth for his second save.

With one out in the seventh and Freddy Galvis on second, Mountcastle sent a 1-2 slider from Bryan Shaw (1-1) out to left. Left fielder Eddie Rosario got back to the wall and leaped, but the ball hit a fan standing up in the front row and fell onto the field.

The initial call of a home run was upheld after a crew chief review to check for fan interference.

It was Mountcastle’s seventh homer of the season and third in his past four games.

The Orioles added an insurance run when Pedro Severino scored on Anthony Santander’s sacrifice fly in the eighth.

Harold Ramirez drove in the Indians’ run with a triple, and Jose Ramirez had two hits. 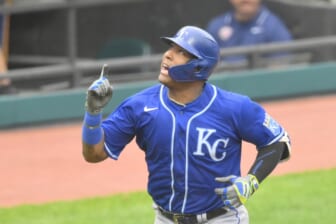 Baltimore reliever Hunter Harvey, who strained his left oblique in spring training, made his 2021 debut, allowing a run on two hits in one inning.

Cleveland’s Jean Carlos Mejia tossed three scoreless innings in his first career start after three relief appearances. The 24-year-old allowed a hit and a walk while striking out two.

The Indians collected two singles in the third inning, but Akin got Harold Ramirez to ground into a force play to end the threat.

Baltimore had two men on in its half of the third, but Mejia induced a double-play grounder from Trey Mancini.
a
Cleveland broke the scoreless tie in the sixth. Jose Ramirez reached on a one-out single and Harold Ramirez lined a triple to right center.