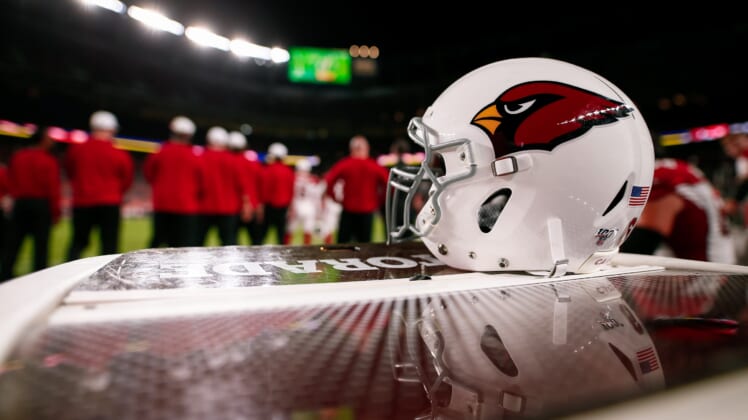 Aug 29, 2019; Denver, CO, USA; A general view of a Arizona Cardinals helmet on the sidelines in the second quarter against the Denver Broncos at Broncos Stadium at Mile High. Mandatory Credit: Isaiah J. Downing-USA TODAY Sports

The Arizona Cardinals didn’t need much help from the officials during their Week 6 “Monday Night Football” game against the Cowboys in Dallas. Ezekiel Elliott provided Arizona all the help it needed.

However, the officials on hand in Dallas decided that it made sense to gift Arizona an interception. Check out cornerback Dre Kirkpatrick literally tackling star Cowboys rookie wide receiver CeeDee Lamb before intercepting Andy Dalton in the third quarter.

Seriously, how does that go uncalled? That would have actually been a nice move in the Octagon. Shockingly, the NFL decided to get rid of the pass interference instant replay rule for the 2020 season. One might think that would have come in handy here.

We get the human error equation to the whole thing. The Cardinals can’t be too upset that said human error went in their favor. With that said, this was as blatant as it gets.

For a Cardinals team that saw Elliott gift it two touchdowns and later witnessed Kyler Murray connect with Christian Kirk on an 80-yard touchdown, this interception could not come at a better time. The Cardinals would go on to score a touchdown to take a 28-3 lead.