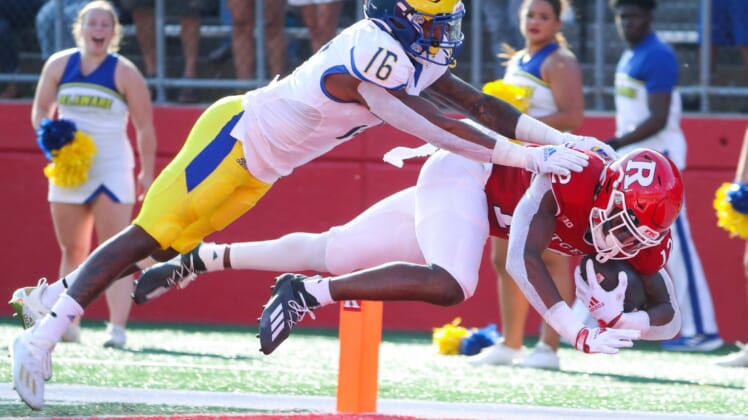 Noah Vedral passed for 323 yards and two touchdowns and the Rutgers Scarlet Knights rolled to a 45-13 win over the visiting Delaware Fightin’ Blue Hens on Saturday.

Isaih Pacheco rushed for 69 yards and two touchdowns for Rutgers (3-0), which is 3-0 for the first time since winning the first seven games of the 2012 season.

Vedral completed 21-of-25 passes, including 10 straight at one point. Bo Melton caught five of Vedral’s passes for 121 yards and a touchdown.

Dejoun Lee gained 121 yards on 15 carries, including a 71-yard dash that set up the Blue Hens only touchdown. Nolan Henderson was 11-for-20 for 95 yards and a touchdown.

The Scarlets Knights took the early lead when Vedral found Melton down the right side for 28-yard touchdown with 9:34 remaining in the first quarter.

Early in the second quarter, Vedral hit Melton for 57 yards to the Delaware 27. Three plays later Isaih Pacheco ran 20 yards for a score and Rutgers led 14-0.

The Blue Hens answered quickly. On the first play from scrimmage, Lee got around the right end and raced 71 yards to the Rutgers one-yard line. On the next play, Henderson passed to Thyrick Pitts for the touchdown with 11:46 left in the half.

Then it was Rutgers turn for a quick strike as Vedral, on the first play from scrimmage, found Brandon Sanders down the middle for a 62-yard catch and run touchdown to give Rutgers a 21-7 lead.

Ryan Coe matched his career high with a 53-yard field goal to pull Delaware within 21-10, but Rutgers’ Aaron Young scored from six yards out to finish a 60-yard drive and Aron Cruickshank capped the Scarlet Knights first half with a 62-yard punt return touchdown to make it 35-10 at intermission.

The teams traded field goals in the third quarter and then Rutgers went 75 yards in 12 plays with Pacheco scoring on a 1-yard plunge with 10:16 remaining in the game.