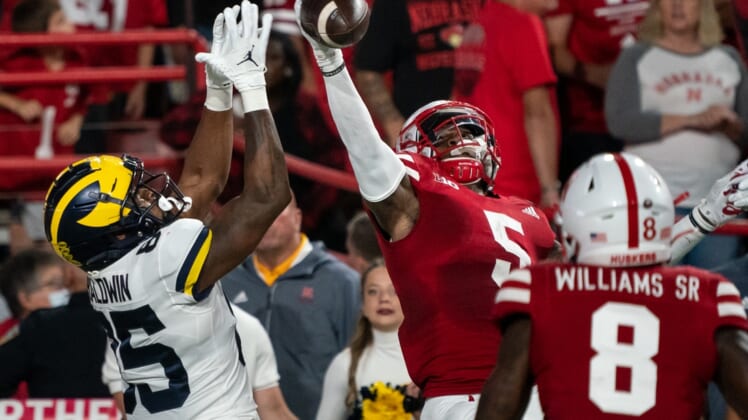 Jake Moody kicked the game-winning 39-yard field goal with 1:24 left to lift No. 9 Michigan to a 32-29 win at Nebraska on Saturday in Lincoln.

Moody tied the game at 29-29 with 3:00 left on a 31-yard field goal, and then the Wolverines recovered a fumble by Nebraska quarterback Adrian Martinez to set up his game winner.

After a scoreless first quarter, Michigan opened the scoring with 9:52 left in the second quarter on a 35-yard field goal by Moody.

Before the end of the half, Michigan drove the field and took a 13-0 lead with nine seconds remaining in the second quarter on a 3-yard touchdown run by Hassan Haskins.

Nebraska responded on the opening drive of the second half, cutting Michigan’s lead to 13-7 on a 46-yard touchdown pass from Martinez to Austin Allen with 12:49 remaining in the third quarter.

Later in the third quarter, Michigan regained a 13-point lead, going up 19-7 on a 3-yard touchdown run by Haskins to punctuate a 10-play, 91-yard drive.

Nebraska immediately responded, going 75 yards in five plays and cutting Michigan’s lead to 19-14 on a 41-yard touchdown pass from Martinez to Rahmir Johnson with 1:24 left in the third quarter.

Following an interception by Deontai Williams that gave the Cornhuskers the ball at the Michigan 13-yard line, Nebraska took a 22-19 lead with 52 seconds remaining in the third quarter. First, Martinez hit Levi Falck for a 13-yard touchdown pass, and then Martinez ran in the 2-point conversion.

Nebraska came back on its next possession, grabbing a 29-26 lead on a 5-yard touchdown run by Martinez with 7:08 remaining.