WATCH: No. 2 Georgia Bulldogs run away from South Carolina, 40-13 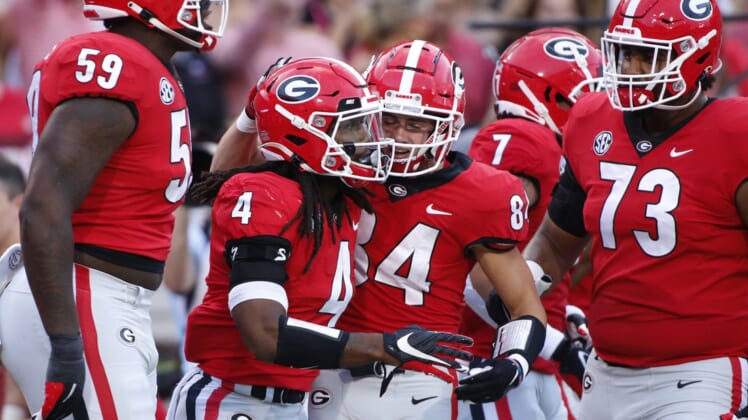 Sep 18, 2021; Athens, Georgia, USA; Georgia Bulldogs running back James Cook (4) celebrates with his teammates after scoring a touchdown against the South Carolina Gamecocks during the first half at Sanford Stadium. Mandatory Credit: Joshua L. Jones/Athens Banner-Herald via USA TODAY NETWORK

JT Daniels threw for 303 yards and three touchdowns to lead No. 2 Georgia to a 40-13 victory over visiting South Carolina in the Southeastern Conference opener for both teams Saturday in Athens, Ga.

Adonai Mitchell caught four passes for a team-high 77 yards. Kendall Milton (66 yards) James Cook (51 yards) and Zamir White (51 yards) powered a ground game that rushed for 184 yards on 31 carries — an average of 5.9 yards per attempt — as the Bulldogs amassed 491 yards of total offense.

Georgia struck back quickly, with Daniels finding Jermaine Burton wide open for a 43-yard touchdown pass and a 14-3 lead with 7:00 left in the first quarter.

South Carolina pulled to within 14-6 when White hit a 27-yard field goal. It was set up when South Carolina took over on Georgia’s 12-yard line after intercepting Stetson Bennett, who was rotating in at quarterback.

Georgia pulled away in the second quarter, outscoring the Gamecocks, 12-0.

After Daniels hit Mitchell for a 38-yard touchdown with just over six minutes left in the first half, Jordan Davis and Nolan Smith tackled quarterback Luke Doty in the end zone for a safety with 24 seconds remaining. Georgia capped the half when Jack Podlesny made a 36-field goal as time expired.

Georgia resumed where it left off in the third quarter, forcing two turnovers and converting both into touchdowns.

Following an interception, White scored on a five-yard run. After South Carolina fumbled away its ensuing possession, Daniels threw a four-yard scoring pass to Cook for a 40-6 lead with 7:37 left in the quarter.

South Carolina was forced to play three quarterbacks after starter Zeb Noland hurt his hand midway through the first half. He was replaced by Luke Doty and Jason Brown, who threw one pass that was incomplete. Noland was 1-for-2 passing for 61 yards.

Doty went 13-for-26 passing for 153 yards and a touchdown and an interception, while Kevin Harris and ZaQuandre White each rushed for 31 yards. Receiver Josh Vann had three catches for a team-high 128 yards, including a 36-yard touchdown reception that made it 40-13 with 10:55 left.

Daniels finished 23-for-31 passing with an interception.