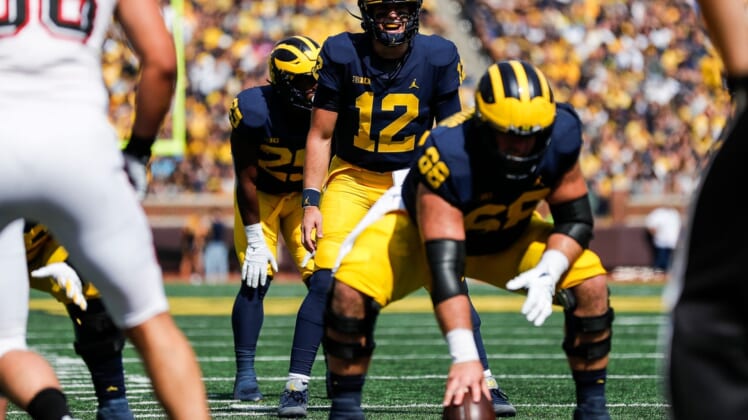 Michigan quarterback Cade McNamara (12) prepares for a snap against Northern Illinois during the first half at Michigan Stadium in Ann Arbor on Saturday, Sept. 18, 2021.

Michigan and Rutgers took care of business during the non-conference portion of their schedules.

They collide in the Big Ten Conference opener on Saturday in Ann Arbor, Mich.

The Wolverines are up to No. 19 in the rankings after three convincing victories, including a 63-10 pounding of Northern Illinois on Saturday. Relying on a powerful running game once again, the Wolverines scored touchdowns on their first nine possessions.

Michigan (3-0) has already surpassed the 1,000-yard rushing mark. The team is led by the duo of Blake Corum (8.5 yards per carry, seven touchdowns) and Hassan Haskins (5.7 YPC, four TDs).

Rutgers coach Greg Schiano knows the competition level will rise significantly this weekend. His team’s three wins have come against Temple, Syracuse and Delaware. The Scarlet Knights recorded a 45-13 win over the Blue Hens on Saturday.

“They’re playing good football. They’re playing winning football,” Schiano said of Michigan. “They’re holding onto the ball, playing good defense and running the ball. When you do that, you have a chance to win every week. We have our work cut out for us, for sure. But I’m anxious to see how we stack up, and I know our players are. That’s what it’s about.”

Wolverines quarterback Cade McNamara had a breakout performance against the Scarlet Knights last season. He passed for 260 yards and four touchdowns and rushed for another score in a relief effort during a 48-42 win in triple overtime.

Rutgers gave away a 17-point lead that night.

“That game was a shame,” Schiano said. “We had our opportunity there and we didn’t take advantage of it. This is a different Michigan team, and I’d like to think we’re a different Rutgers team, too.”

McNamara connected with Cornelius Johnson on an 87-yard pass play against the Huskies but hasn’t been asked to throw very often this season, due to the success of the ground game. He’s connected on 64.9 percent of his attempts with three touchdowns and no interceptions.

“He’s been consistently good since he’s played in games,” Wolverines coach Jim Harbaugh said. “The ability to drive the team for points, that’s getting really impressive. I don’t know what that percentage is but it’s got to be pretty high. Overall, confidence, ability, time on task, reps, just like anybody, when you play in a game and realize, you can do this. Not as hard as it seems. You get better at football by playing football.”

The Scarlet Knights will be without two of their cornerbacks. Starter Malachi Melton and reserve Chris Long were suspended after being taken into police custody following an incident involving a paint ball gun.

Rutgers quarterback Noah Vedral has also avoided interceptions during the first three games. He’s completed 71.6 percent of his attempts with four touchdowns. Bo Melton (20 receptions, 227 yards, 2 TDs) has been his No. 1 target.

Rutgers has won every game by double digits despite averaging just 3.3 yards on the ground. The defense has forced eight turnovers and notched 14 sacks.

“Hard, tough. Guys that play all out, play together, don’t make mistakes, execute, disciplined teams,” Harbaugh said of the Scarlet Knights. “All the good stuff.”