Matt Corral’s 68-yard touchdown pass to Braylon Sanders held up as No. 17 Ole Miss thwarted a potential game-winning two-point conversion in a 52-51 win over No. 13 Arkansas on Saturday in Oxford, Miss.

With one second to play, KJ Jefferson tossed a 9-yard touchdown pass to Warren Thompson. Arkansas elected to go for the win, however Jefferson’s wild throw fell incomplete to hand Ole Miss the victory.

After throwing six interceptions and losing a fumble in last year’s 33-21 loss at Arkansas, Corral was sharp in the rematch. He completed 14 of 21 passes for 287 yards with two touchdowns. He also rushed for two scores.

Henry Parrish Jr. rushed for 111 yards on 18 carries and Snoop Conner had 110 on 12 totes and three touchdowns for the Rebels (4-1, 1-1 SEC), who won for the third time in the last four games in the series. Sanders had 127 receiving yards.

Ole Miss totaled 611 yards of offense and was successful on 4-of-5 fourth-down opportunities. 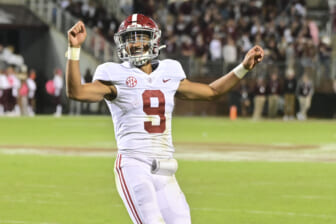 Raheim Sanders rushed for 139 yards on 17 carries, and Trelon Smith scored his ninth touchdown in his past 10 games.

The game marked the first time in FBS play this season with both offenses rushing for over 300 yards. Arkansas had 350 yards rushing, while Ole Miss finished with 324.

Jefferson ran one in and Smith scored on a 14-yard run to put the Razorbacks up 14-6 in the second quarter.

Corral rallied Ole Miss by finding a wide-open Dontario Drummond on a 66-yard strike. The junior then scrambled on a two-point conversion try to forge a tie at 14.

His second score on the ground put Ole Miss ahead for the first time late in the half.

Costa atoned for an earlier conversion miss with a career-long 50-yard field goal on the first series of the second half, but Jefferson answered with a 3-yard touchdown pass to Knox.

A failed fourth-down attempt by the Rebels left the ball on the visitors’ 33, and Cam Little tied it at 24 on a 31-yard boot.

The teams traded scores — Conner’s 51-yard scamper and Jefferson’s 6-yard airborne effort — for a 31-all tie after three quarters.

Conner scored twice, and Burks and Jefferson ran for TDs in the fourth quarter.