WATCH: No. 12 Ole Miss tops Vanderbilt to finish 7-0 at home

Matt Corral passed for 326 yards and two scores to lead No. 12 Ole Miss to a 31-17 win over Vanderbilt, wrapping up the Rebels’ home schedule in Oxford, Miss.

Ole Miss (9-2, 5-2 Southeastern Conference) needed help from Arkansas earlier in the day to stay alive in the SEC West race, but Alabama defeated the Razorbacks 42-35 to earn a spot in the conference title game in Atlanta.

That did not deter Corral — projected to be a high first-round NFL Draft selection — in his final home start.

The Ventura, Calif., native finished 27 of 36 with an interception — just his third overall. He also rushed for 29 yards on seven carries.

The Rebels’ Jerrion Ealy carried nine times for 55 yards with a rushing and receiving touchdown, and Henry Parrish Jr. ran for a score. Dontario Drummond caught seven passes for 81 yards and a TD.

Ole Miss posted a 7-0 mark at home — its first undefeated season in Oxford since 1992.

Mike Wright started at quarterback and went 22 of 44 for 241 yards with an interception. He added 61 rushing yards on 13 carries.

Rocko Griffin rushed 26 times for 117 yards with a score and Chris Pierce totaled 113 yards on 10 catches for Vanderbilt, which has dropped 20 consecutive SEC contests.

In a great start for its offense, Ole Miss traveled 65 yards on just five plays in 67 seconds. Corral capped the drive with an 8-yard toss to Ealy for a 7-0 lead.

After forcing a Vanderbilt punt, the home team went 57 yards, eventually settling for Caden Costa’s 28-yard boot to make it 10-0 at 10:18.

Following a 49-yard field goal by Joseph Bulovas, Corral added on by working a run-pass option that led to a flip to Drummond, who tight-roped down the sideline and into the end zone from 10 yards out for 17-3 lead at 12:51 of the second. 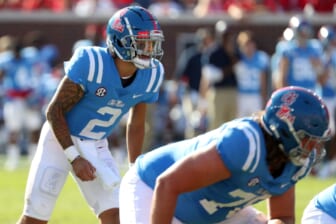 Deantre Prince made an incredible, toe-tapping interception of Wright at the Ole Miss 3 to ice the victory.