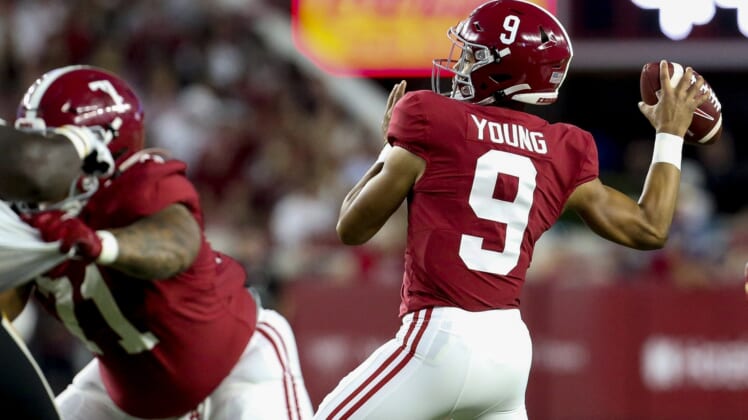 Jameson Williams returned two kickoffs for touchdowns, leading top-ranked Alabama to a 63-14 win over Southern Mississippi on Saturday night in Tuscaloosa, Ala.

On his first return TD, Jameson Williams caught the ball at the goal line, broke two tackles, zoomed past the Golden Eagles kicker and finished by getting to the sideline and into the end zone untouched.

Just over five minutes later, the Crimson Tide finished off a 60-yard drive with Young’s pinpoint 16-yard toss for an over-the-shoulder catch by Jahleel Billingsley in the end zone for a score.

Young connected with Latu for the Tide’s third touchdown of the opening quarter and a 21-0 lead.

Roydell Williams set up his one-yard touchdown run with a 55-yard rush on which he was tackled just short of the pylon on the last play of the first quarter. He gave Alabama a 28-0 lead at the 14:26 mark of the second quarter.

It was 42-7 at halftime, with Young completing 12 of 13 passes for 226 yards and four touchdowns to that point.

The Tide have an eight-game winning streak against the Golden Eagles and have won 14 of the last 15 meetings.

Southern Miss (1-3) got two touchdown passes from quarterback Ty Keyes, with those caught by Chandler Pittman and DeMarcus Jones.

Alabama tied an NCAA record with 30 or more points in 31 straight games, which is the longest current streak of its kind in the FBS. It shares the mark with Central Florida, which had 31 from 2017-2019.