Nikola Jokic had 28 points and 14 rebounds and Aaron Gordon hit back-to-back 3-pointers in the final two minutes Saturday as the Denver Nuggets escaped with a 95-94 win over the visiting Houston Rockets.

Daniel Theis scored 18 points and hit a 3-pointer with 2:46 left to give the Rockets a 94-89 lead. Gordon responded with six straight points before Jokic sealed the victory with a block of Jae’Sean Tate’s layup at the buzzer.

Will Barton tallied 15 points, seven rebounds and six assists for Denver, which won its second straight game despite shooting 9 of 40 (22.5 percent) from 3-point range.

Theis returned after missing two games with a sore right big toe and was 7-of-11 shooting in 32 minutes of action for Houston, which has lost seven in a row and eight of its first nine games.

The Nuggets closed to within 47-46 at halftime after Jokic scored 11 of Denver’s final 13 points to end the second quarter.

Jokic drew MVP chants from the home crowd after scoring five straight points to put the Nuggets ahead 64-57 with 4:05 left in the third quarter.

Denver was unable to maintain the momentum, however, and Houston trailed by just one after three quarters, setting up a wild fourth quarter.

Facundo Campazzo highlighted a 9-1 run by the Denver reserves early in the fourth quarter to enable the Nuggets to grab an 83-76 advantage. 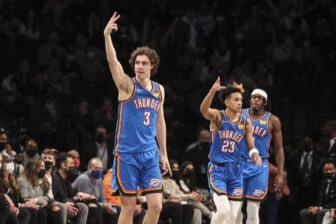 But Houston responded with seven unanswered points and tied the game at 83 on Wood’s dunk with 7:20 remaining.

Denver forward Michael Porter Jr. exited the game in the first quarter with lower back soreness and did not return.