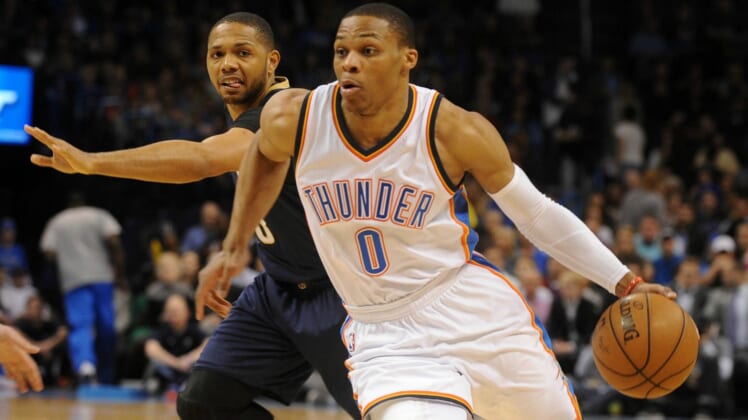 If you haven’t heard, Russell Westbrook is the new triple-double king of the NBA. He broke Oscar Robinson’s longstanding record of 41 triple-doubles in a season in spectacular style Sunday night, scoring 50 points, 16 rebounds and 10 assists. Oh, and his final three points came on the game-winning shot as the Oklahoma City Thunder defeated the Denver Nuggets.

It was just a tremendous cherry on top of a record-breaking season that will surely garner Westbrook MVP honors when it’s all said and done.

Highlighting this achievement, Nike released a new ad that features Westbrook highlights interwoven with highlights of Robinson from his playing days. It’s fantastic, as you’re about to see.

The Thunder occupy the No. 6 seed in the west with a record of 46-34 with just two games remaining. They’re locked into that spot in the standings and are headed for a first-round matchup against the Houston Rockets, which feature Westbrook’s only real competition for the MVP award this year, James Harden.

Get your popcorn ready, because that series is going to be insanely fun to watch. Unless, of course, your a huge fan of lockdown defense. If that’s the case, you might want to avoid this one.